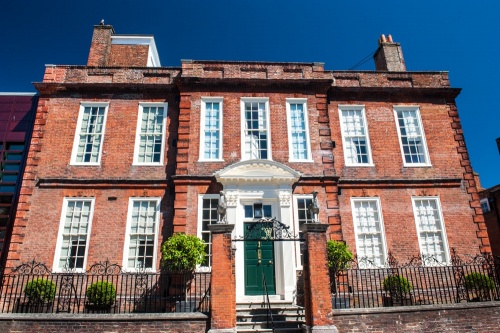 Pallant House Gallery
Pallant House Gallery is home to one of the finest private gallery collections of fine art in the UK. The gallery is based on artwork collected by Dean Walter Hussey when he was Dean of nearby Chichester Cathedral 1955-1977. Included are works by Henry Moore, J Ceri Richards, and Graham Sutherlan, among many others.

What is so unique and appealing about the Pallant House Gallery is that it combines a modern gallery space with an elegant Georgian townhouse, blending historic Georgian rooms and modern display space seamlessly.

In 1982 Dean Hussey offered his collection of modern British art to the city of Chichester on one condition; that the collection be displayed to the public in the Grade I listed Pallant House. The red-brick house on North Pallant was built in 1712 for Henry and Elizabeth Peckham in an elegant Classical Revival style, with a symmetrical facade and Corinthian columns on either side of the entrance. We do not know who designed the house for the Peckhams, but it seems likely the work was performed by a local mason.

The Peckham's marriage was not a love-match, but a marriage of convenience, for Henry Peckham had to rescue his family's finances after his father left him burdened by debt. He found the answer in marriage to a wealthy widow named Elizabeth Albery, who was a good 15 years his senior.

The marriage lasted just 5 years before an acrimonious split ended in a series of lawsuits. One of the main issues in the marriage breakup was the cost of Pallant House, which cost 3000 pounds to build.

The historic house was a perfect venue to showcase the art collection, but then other bequests followed, including a gift of art by a local businessman named Charles Kearley, who offered works by Cezanne, and Klee, amongst others.

Then Professor Colin St John Wilson, who designed the new British Library, offered his collection of modern British art. A new wing was added to the Queen Anne house, offering a spacious and light-filled display area so all the works in the galleries collections could be shown to visitors.

The collections are based around the bequests of the different donors, so each one reflects the tastes of the original collector. One good description is that Pallant House is a collection of collections! Though the focus is modern British art, there is much more to see, including Bow Porcelain.

Gallery themes include Post-Impressionist art, Surrealism in Britain, Church Patronage in Post-War Britain, Landscape Between the Wars, and Pop Art, among others.

And then there is the house itself, a beautiful example of Queen Anne style, and one which set the tone for Chichester's development in the early 18th century.

The museum is located very close to all major attractions in the city centre, including the cathedral.