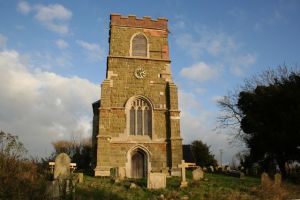 Burwell, St Michael's Church
The parish church of St Michael at Burwell may have been tied to 12th-century Burwell Priory. The church is composed of a chancel, nave, and north aisle, with a three-stage west tower of attractive greensand stone and red brick.

The building probably dates to the Norman period, and may well have been constructed in conjunction with the priory, founded by John de Hay in the early 12th century.

Within St Michael's, the most interesting feature is the Norman chancel arch, which has finely carved capitals. Above the chancel arch is a worn medieval wall painting showing a crowned head and a Lombardic letter 'M', suggesting that the head may be meant to represent the 12th century Queen Maud / Matilda.

Another possibility is that the figure is that of Margaret of Navarre, Queen of Sicily. There is a carved Jacobean pulpit and a number of interesting memorials.