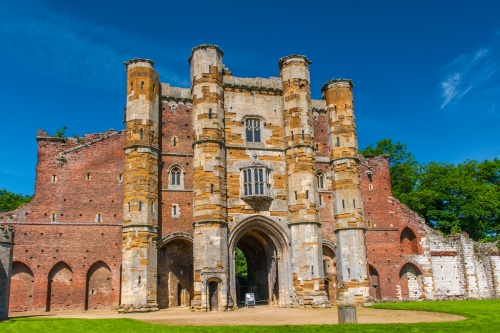 Thornton was founded as an Augustinian priory in 1139 but became a full-fledged abbey in 1148. The chief interest here is a massive 14th century gatehouse, the largest monastic gatehouse in England, probably built in response to the Peasant's Revolt of 1381. The gatehouse is remarkable for its early use of brick as a building material.

William le Gros (whose name translates as William the Fat) was a powerful Norman lord, Earl of Yorkshire and Count of Aumale. In 1139 Le Gros founded a priory of 12 Augustinian canons at Thornton, on a tributary of the River Humber named Skitter Beck.

The canons came from Kirkham Priory in Yorkshire. The new priory was well-endowed with estates, and within a few short years it was considered important enough to raise to full abbey status. Le Gros chose to be buried at Thornton Abbey on his death in 1179.

The first abbey buildings were of timber, but in 1264 the timber structures were completely rebuilt in stone, under the direction of Abbot William of Lincoln.

In 1382 the Abbot of Thornton was granted a license to build a crenellated gatehouse at the abbey entrance. Given the date, it seems logical to assume that the abbot felt a need to defend his abbey against outbreaks of social unrest like the Peasant's Revolt of the previous year. The gatehouse was built with brick, one of the first known uses of medieval brick in Lincolnshire. 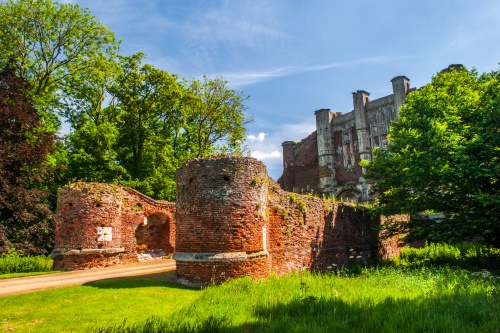 The new building served a dual purpose, aside from protecting access to the abbey it provided comfortable accommodation for guests, away from the bustle of the main abbey buildings. The bricks were brought from Hull, and the structure was dressed with stone from Tadcaster.

The gatehouse has chambers on two floors, reached by a spiral stair from the southeast turret. Within the thickness of the walls are garderobes and small utility rooms. The exterior is heavily decorated with sculpture, but the presence of arrow slits suggests that defence was never far from the architect's mind.

A large brick barbican was added in front of the gatehouse in the early 16th century, accessed by a drawbridge (now gone). 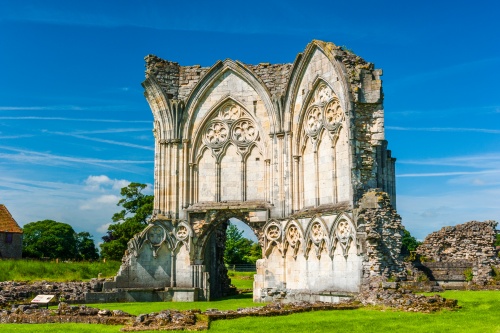 Thornton was one of the richest Augustinian houses in England. In 1518 the abbot obtained papal approval to celebrate mass in a mitre with gold plates. In 1539 Henry VIII officially dissolved the abbey, but the buildings must still have been intact in October 1541, when Henry and Queen Catherine Howard stayed at Thornton.

The king held a Privy Council meeting here, and only 2 months later made Thornton a college to train priests for his new Church of England. In 1547 however, Edward VI officially suppressed Thornton and granted it to the Bishop of Lincoln.

Over the following centuries the abbey was gradually robbed for building stone, and around 1607 Sir Vincent Skinner built a fashionable Jacobean manor with stone from the abbey church. Skinner, a staunch Protestant, was an ally of William Cecil, Lord Burghley. He served as Auditor of the Receipt, an important court office, under James I.

According to a popular account by a Lincolnshire diarist named Abraham de la Pryme, the manor mysteriously collapsed only a few years later 'without any visible cause'. It seems more likely that the house was never finished, or that it was pulled down to pay Skinner's rising debts, for he died in poverty in High Holborn debtor's prison in 1616. Nothing remains of the house, but its gardens have recently been rediscovered.

Today the only substantial remains at Thornton are those of the massive brick gatehouse and barbican, which is in the care of English Heritage. Very little of the rest of the abbey remains intact. There are ruins of two walls of the chapter house (1282-1308), with very nice arcading, and parts of the treasury can be seen, as well as a slype, or passage from the church to the chapter house.

The chapter house is unusual in that it was octagonal, one of only 3 known examples of a chapter house without a central column in England (the others being York Minster and Southwell Minster). One of the abbey buildings was converted into a residence named Abbot's Lodge, which still stands. 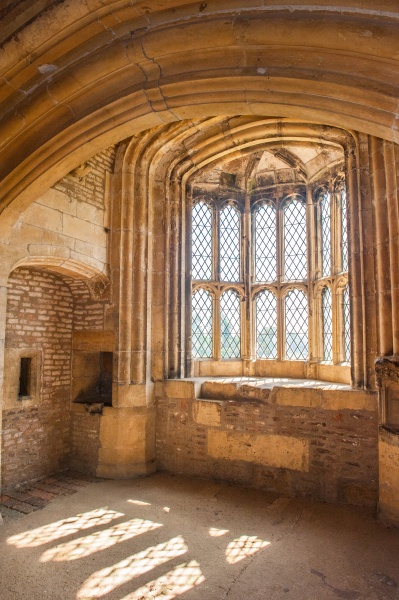 The Ghost of Thornton

The abbey gatehouse is said to be haunted by the spectre of Thomas de Gretham, a 14th-century Abbot. According to legend, Gretham secretly practiced the Black Arts, and lived a licentious lifestyle. When his vices were discovered the punishment was brutal; he was walled up alive in the monastic dungeon and left to starve.

According to antiquarian William Stukeley, the abbot's remains were discovered in 1722, seated at a table with a book and candlestick before him.

An alternate version of events says that workmen doing renovations in the 1830s discovered a secret chamber with a skeleton seated at a table, a book, pen, and ink before him.

Since that time the mysterious figure has reportedly been seen lurking around the grounds, or lurking in the shadows of the gatehouse. Another version suggests that the walled-up abbot was Walter Multon (d. 1443).

Other medieval clerics at Thornton seem to have had a penchant for getting into trouble; in 1235 the abbot was deposed by Bishop Groseteste for unspecified reasons. In 1298 a canon named Peter de Alazun left without permission to become a secular scholar at Oxford University. He was excommunicated, but only returned to Thornton in 1309, presumably after satisfying his urge towards scholarship.

In 1346 another canon, Peter Franke murdered a knight's servant who had seized food bound for the abbey. He was only reprieved when the Earl of Lancaster personally intervened on his behalf.

The exterior of the abbey is open to view, but the gatehouse has only seasonal opening - see the English Heritage website link below for current details. 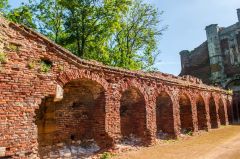 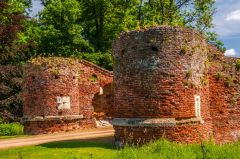 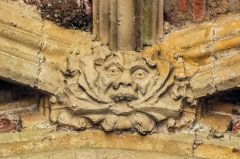 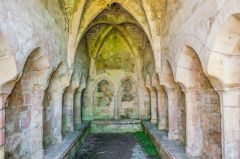 More self catering near Thornton Abbey and Gatehouse >>

More bed and breakfasts near Thornton Abbey and Gatehouse >>