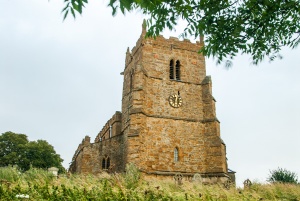 The tiny village of Walesby sits precariously on the very western lip of the Lincolnshire Wolds. There are two churches serving the village, St Mary's and All Saints. The newer - and from a historical perspective, the less interesting - church of St Mary's is in the heart of the village.

The older All Saints church sits atop a short but steep hill above the village, and from the churchyard you can get wonderful views across the Lincolnshire Plains towards Lincoln and the west.

The church has a fascinating history. It dates back to at least 1172, and probably earlier. There is strong evidence of Roman occupation nearby, so it is quite possible there was an early Saxon church on this site.

The tower was added later, probably in the 15th century. In the late 19th century a new church was built because, so the story goes, the villagers had had enough of the steep climb to the old church. 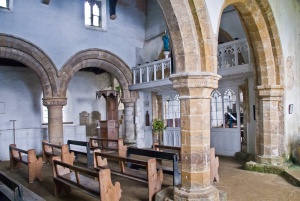 The 'Old Church' fell into disuse and was left to moulder until it was restored by Canon Harding in the 1930s. In that same decade, the church became a centre for pilgrimages by, among other groups, the Ramblers Association, and it is from that connection that Walesby gained its nickname as 'The Ramblers Church'.

A stained glass window depicting walkers and cyclists can be found in the lady chapel. This 'Ramblers Window' was donated by the Grimsby Wayfarers Association. The RA hold a special Trinity Sunday service at Walesby every year.

There is a lovely 17th-century carved pulpit that came from a church in Kirkstead, and in the north aisle are several painted box pews.

Outside the church stands at beacon erected in 1988 as part of the 400th-anniversary celebration of the English victory over the Spanish Armada. It is a replica version of the beacons used throughout England to warn of the approach of the Armada.

About Walesby Church
Address: Walesby, Lincolnshire, England, LN8 3XA
Attraction Type: Historic Church
Location: Up a short track, signposted from the centre of the village. The ascent is relatively steep and can be muddy in wet weather. Usually open at all times.
Location map
OS: TF138924
Photo Credit: David Ross and Britain Express

More self catering near Walesby Church