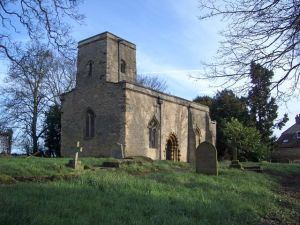 Farndish, St Michael's Church
An early 13th-century church with the addition of a 15th-century tower. The tower is worth a second look; it was not built onto the exterior of the church as you might expect, but actually built inside the nave.

The south doorway is beautifully carved in Early English style. It is built of alternating bands of grey limestone and reddish ironstone to produce a striking banded effect.

There are carved stone corbel heads around the windows, which feature very nice tracery in places. The east window is 15th century, and there is a fine 14th-century window on the south wall of the chancel. There is a blocked 12th-century doorway on the north wall of the nave.

The Norman font has survived, though the majority of the interior is from a restrained Victorian restoration. The church is no longer used for regular worship and is in the care of the Churches Conservation Trust.