HERITAGE HIGHLIGHTS:   Memorials to members of the Comptons of Castle Ashby 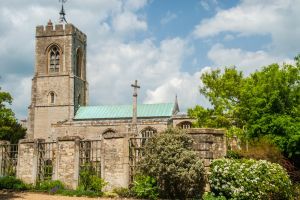 The parish church of Castle Ashby tends to be overshadowed by the nearby mansion of the same name, which is a shame because it's a lovely medieval building and is well worth a visit in its own right. The church stands directly beside the mansion, between the house and the gardens.

The oldest part of the building is the north doorway, which is 12th century, though it is not in its original position and may have been brought here from another location, rather than surviving from an earlier church on this site. As for the remainder of the church, most of it is 14th and 15th century, with a fair bit of Victorian restoration.

The church is home to a number of very fine monuments to members of the Compton family of Castle Ashby manor. Many of these are Victorian, including a marble monument by Pietro Tenerani of Margaret, wife of the 2nd Marquess of Northampton (d. 1830).

The same sculptor was also responsible for a large Angel of Resurrection figure in marble, made for the Marquess. Under the east window of the chantry chapel is a monument of Caen stone to Charles, the 1st Marquess of Northampton, and his wife, Mary. 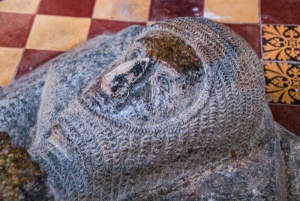 But there are many much older monuments as well, including a quite wonderful effigy of Sir David de Esseby, who died around 1265. The name Esseby was later transformed into Ashby, but initially, the parish was known as Esseby David.

There is a lovely 15th century brass to a former rector named Walter Ermyn (d. 1401), showing the priest in his robes, surrounded by small figures of 10 saints, each with their traditional symbol.

There is a Jacobean pulpit with carved panels and a fanciful canopy. The pulpit and sounding board are thought to be the work of architect Inigo Jones, who was engaged at work on Castle Ashby house.

The medieval font is a plain octagonal one, probably 15th century, with a very simple stem. There are also beautifully carved medieval corbel heads and 14th century carved faces in the vestry. At the end of the south aisle are small areas of 14th-century wall paintings that only came to light in 1976. The desks and choir stalls are carved with figures of angels and musical instruments.

High on the north wall, near the north door, is a small doorway that once led to a parvise, or small chamber over the porch. Legend says that in 1642 this parvise chamber was occupied by an old woman who managed to raise the alarm when she saw Parliamentary troops set fire to the Castle.