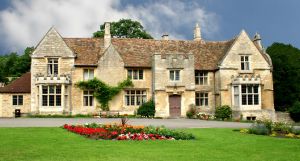 Rushden Hall
The oldest domestic building in Rushden, Rushden Hall dates to at least the 14th century. To these early beginnings were added a myriad of architectural additions and improvements over the centuries, so that Rushden Hall today resembles an attractive pastiche of historic styles and periods under a clay tile roof.

The Hall is entered through an embattled two-storey porch which dates to the 15th century. For centuries the Hall was residence to a succession of squires, including the Pemberton family who lived here for 200 years. Chief among the early Pembertons at Rushden was Robert Pemberton, Usher of the Chamber to Richard III. A descendant of Robert, Sir Lewis Pemberton, transformed the medieval Hall into a comfortable country house.

Rushden later passed into the hands of the Fletcher family, who owned the property from 1755-1820. One amusing anecdote concerning a Fletcher of Rushen must be told; it seems that one of the Fletcher squires was warming himself by the fire in the room now called the 'Fletcher Room', forgetting that he had his powder horn in his pocket. The powder in the horn exploded in the heat, shattering every window in the room, but leaving the squire shaken but unharmed!

The Hall is now operated by Rushden Town Council. Parts of the Hall are used as office space, while other parts can be hired for functions, including weddings. The building stands amid 32 acres of pleasant gardens. For hire or visitor information contact the town council.

More self catering near Rushden Hall >>