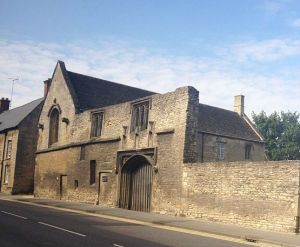 Chichele College
Chichele College is a 15th-century complex of buildings founded by Archbishop Henry Chichele to serve as a chantry college. At its inception, the college was home to eight secular canons, six choristers, and four clerks, who served the local parish church.

Chichele was a native of the Higham Ferrers area and was one of the most influential men in early 15th-century England. He was Archbishop of Canterbury for almost 40 years from 1014 until 1443.

The College was disbanded during the Dissolution of the Monasteries under Henry VIII, and parts of the college buildings were adapted to other purposes, including an inn, farm cottage, and grain store.

The college is composed of four ranges set around an inner courtyard. In the south-east corner is the former chapel, which served as a farm cottage in the 20th century. The east wall of the east range is the most complete medieval survivor, and this includes the entrance gateway.

As you enter the college by the main door look up and you will see three empty niches. These once held statues of the three patron saints of the college; St Mary, Edward the Confessor, and St Thomas.

The College is often used as a gallery exhibition space for art and crafts.

More self catering near Chichele College >>