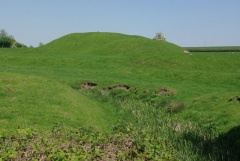 There's really not a lot to Yielden Castle, a medieval motte with two baileys, probably dating to the 12th century. You can still trace the line of banks and ditches encircling a castle mound, but evidence of the original keep is long gone.

Fragments of later medieval stonework can still be seen, however. The River Til flows through the western ditch, suggesting that the river was used to create a water-filled moat.

The motte rises almost 10 metres above the height of the ditch, and the outermost ditch has a diameter of 30 metres. All of which means that it was really quite a small site by castle standards.

We do not know precisely when Yielden Castle was built, but the Trailly family held the site from the time of the Domesday Book (1086) until the 13th century, so they would seem to be the most likely candidates for builders. The castle had fallen into decay by 1360.

Excavations have revealed that there was a round stone tower atop the motte with walls 4 feet thick. It seems likely that a drawbridge linked the tower to the inner bailey. Some of the stonework was heavily burned, suggesting the possibility of a siege.

More self catering near Yielden

More bed and breakfasts near Yielden