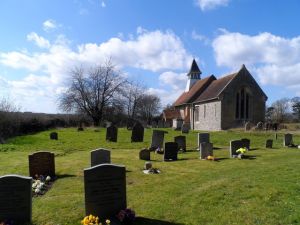 There are two Norman doorways surviving, and one of the original wooden Norman doors is preserved inside the church. This extremely rare surviving 12th-century door still has its original iron strapwork, which is beautifully decorated with carvings of a dragon and a bird. The door is a real Norman treasure and is nationally known.

The font is a comparative newcomer, 'only' dating to the 14th century. Among the other interior features is a royal coat of arms for Charles I, situated over the chancel arch. While there might be nothing unusual in a coat of arms for Charles I, what is really unusual is that the date on the arms is 1660, indicating that even at the very end of the Commonwealth, the parish retained strong royalist sympathies and was not afraid to show it.

Another unusual feature is the roof, which retains many of its original 11th and 12th-century timbers.

St Mary's is no longer in regular use and is now cared for by the Churches Conservation Trust.