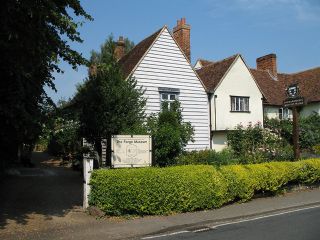 Much Hadham Forge Museum
A working museum of the four generations of Page blacksmiths who operated a forge here from 1811 until 1983. Behind the museum is a Victorian garden dedicated to the culture of such plants as would have been grown in the 19th century.

A set of 3 historic buildings in the heart of the pretty Hertfordshire village of Much Hadham house this fascinating museum. The oldest of the three buildings dates to the 15th century and was erected as a farmhouse for the manor of Moor Place.

The building was converted in the 17th century to a barn when a forge and bellows were added. Then in 1811 a shoeing room and blacksmith's shop were built for Frederick Page, the first of 4 generations of Pages to work Hadham Forge.

Beside the forge are 2 more historic buildings, Forge Cottage and Horseshoe Cottage, both built in the 17th century. The Victorian garden houses an unusual early 19th-century bee shelter, and a granary building from the Earls of Essex's property near Watford that has been taken apart, moved here, and carefully reconstructed.

When Charles Page died in 1983 his daughter gave the 3 buildings to the Hertfordshire Building Preservation Trust. The buildings were restored and opened to the public as a living museum. In other words, do not expect to see simply a series of exhibits in glass cases.

Instead, you can watch a live blacksmith at work on the historic forge, crafting metal objects as the Page's would have done hundreds of years ago. Of course, there are also old tools, photos, and archives to examine, bringing to life not just the building but the people who lived and worked here.

One of the highlights at Forge Cottage is a set of late 16th-century wall paintings, probably painted when the house was used as a courtroom in the reign of Elizabeth I. These unique paintings depict coats of arms to the Newce family, a royal coat of arms to Queen Elizabeth I, and a Biblical scene of the Judgement of Solomon. The paintings offer a wonderful glimpse into the Elizabethan world and how people thought and lived.

The museum collections include objects covering Hadham's history from the Bronze Age to the present. Aside from the blacksmith collection, there are displays on local history, objects found locally by metal detectorists, and tools used by local tradesmen over time.

More self catering near Much Hadham Forge Museum >>

More bed and breakfasts near Much Hadham Forge Museum >>