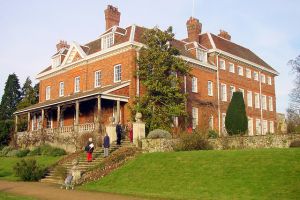 Benington Lordship Country House and Gardens
Benington Lordship Gardens is a seven-acre garden surrounding a lovely Georgian manor house. Beside the manor are the ruins of a Norman castle keep, surrounded by a moat.

The Lordship Gardens are well known for its fantastic display of snowdrops in spring when a carpet of bulbs covers the area around the castle and moat. The best time for snowdrops is towards the middle or end of February. Spring is not the end of the colour, however, as there are daffodils and scillas to follow, and brilliant herbaceous borders in summer.

There was a Saxon fortification at Benington, used by the kings of Mercia. After the Conquest, a Norman motte and bailey fortification was built, and a later flint donjon, or keep, raised inside the enclosure. To the Norman donjon was added a red brick manor in about 1700.

A grand flint gatehouse, which at first glance appears to be part of the Norman fortification, is actually a folly added in 1832. The folly, which includes a curtain wall and summer house, appears to made of stone, but actually, it is built from Pulamite, a mixture of cement made to resemble stonework.

The Lordship Garden frequently appears in lists of the top British Gardens, and the setting, with the historic castle and manor house, is superb.

Within the gardens is a Victorian folly, modern sculptures, a rose garden, special wildlife areas, a carp pond, and a walled kitchen garden. There are a number of special events throughout the year aimed at families and children in particular.