HERITAGE HIGHLIGHTS:   One of the finest medieval barns in East Anglia 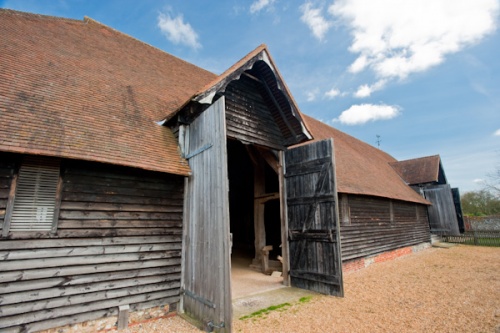 One of the finest surviving medieval barns in the east of England, Prior's Hall Barn was begun in the late 14th century and remained in use until 1976. The barn was used as a space for both storing grain after harvest and threshing it during the winter months.

It was later adapted for housing animals. The farm at Prior's Wood was owned by the priory of St-Valery-sur-Somme in France (hence the name 'priors' wood).

When William the Conqueror was preparing to invade England in 1066 he stayed at the priory, and after his success at the Battle of Hastings he gave land in Essex to the priory as a token of thanks. Edward III seized the priory's estates in England in 1377 and gave Widdington to William of Wykeham, Bishop of Winchester and one of the most powerful men in England.

Two years later Wykeham founded New College, Oxford, and he granted the Widdington estates to the college. The barn was probably built for the college or at least rebuilt in the form we see it today.

Analysis of the timbers used in construction suggests a likely date of 1417-1442. New College owned Prior's Hall until 1920 before it was sold into private ownership and in 1976 it was placed under the care of English Heritage. 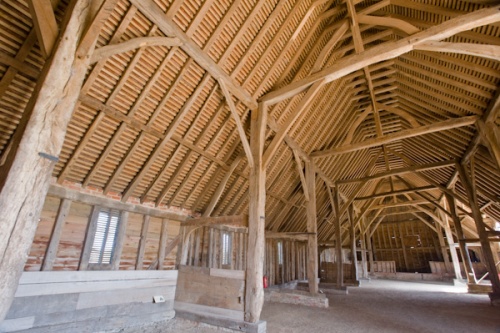 The barn is 124 feet long and 38 feet wide, and reaches 38 feet high, with a hipped roof and small gables at the peak. Internal construction is crown-post and collar purlin, with aisles on either side, divided into 8 bays.

It took over 900 timbers to build the barn, from 400 individual trees. Though the original crown post construction stood the test of time well, by the end of the medieval period the aisle rafters were decaying, so additional purlins were added to brace the structure.

The wall footings were made of flint, but these were replaced by brick in the 19th century. The walls were infilled with lath and plaster and clad with softwood panels. The roof is tiled, and the porch gables have decorative barge boards.

There are two gabled entrances on the south side, so that farm carts could unload their cargo under cover. A typical barn of this period would have had exits opposite each entrance, but there are no exits at Prior's Hall. Beside each porch is a small door allowing access when the large porch doors were shut.

Each door has a small cat door built into it, and there is an owl hole at the gable peak. Since the barn was used for storing grain, control of rats and mice was essential, so natural hunters like owls and cats were a part of keeping the grain as safe as possible. In the 16th century, a raised section of flooring was inserted at the east end, with ventilation built into the floor for drying corn.

English Heritage calls the interior of Priors Hall barn 'breathtaking', and I'd have to agree with that description. The sheer scale of the timber construction is awe-inspiring, and comparable with any of the larger stone churches of the medieval period.

There are no facilities at Priors Hall, and the barn is usually closed during the winter months, though the exterior is easily visible at any time. 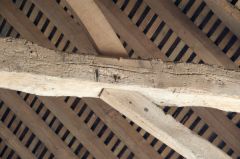 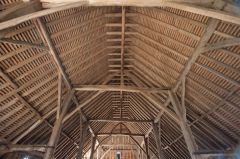 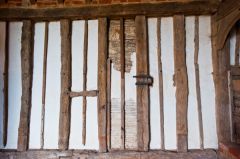 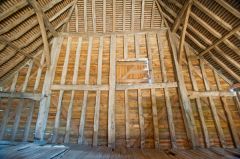 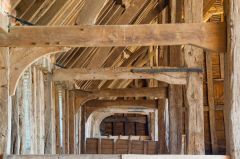