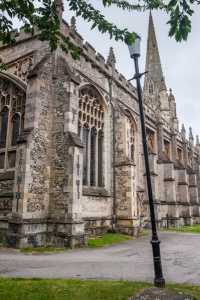 There was almost certainly a Saxon timber church here, and a fragment of a Saxon market cross is embedded in the east wall of the south porch. The timber church was replaced by a stone building in the early Norman period, but around 1250 this too was rebuilt, replaced by a cruciform church in Decorated Gothic style.

Surviving parts of this 13th-century building include arches in the north and south chapels and arcading set into the north aisle wall. Around 1430 the Decorated church was almost completely rebuilt in Perpendicular style, the work taking almost a century to finish.

Though we do not know who was responsible for the early 15th-century work, we do know that the job was finished by John Wastell, a master mason who also worked on Kings College Chapel, Cambridge.

The result of the final rebuilding of St Mary's is a nave of extraordinary beauty, spacious and light-filled. The nave arcade is a work of art, with intricately carved spandrels, some decorated with Tudor roses. More Tudor roses decorate the nave roof bosses, along with symbols of Catherine of Aragon, and members of the Guild of the Holy Trinity.

At the west end of the nave hangs a Garter Banner belonging to Robert Austen, Lord Butler of Saffron Walden. The banner once hung in St George's Chapel at Windsor Castle, the home of the Order of the Garter. 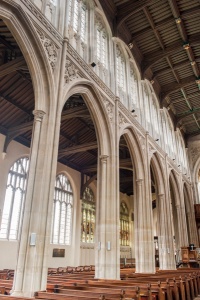 At the eastern end of the north aisle is a series of blind arcades - three arches set into the wall, decorated with 13th-century carvings. The decorative carvings are very worn, but you can easily make out a figure of King David playing his harp in the easternmost bay.

Other identifiable symbols include a St Andrews Cross, angels, inverted fleur-de-lys, a fig tree, and an eagle. Biblical figures include St John the Baptist, Christ, a Madonna, 'Doubting' Thomas, and a depiction of the Agony in the Garden.

Set against the wall within the arches are 8 memorial brasses, dating back to 1430. These were originally on tombs in the south chancel aisle, and were stored for a time at Audley End House. Moving from the north aisle into the north chapel you will find a marble tomb of John Leche. 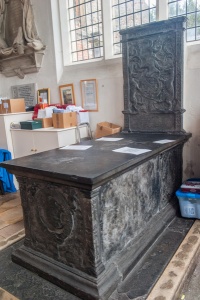 The south chapel has more historical interest, however, including the tomb of Thomas Audley (1488-1544). Audley was the son of a simple yeoman farmer, but he rose to become Lord Chancellor of England under Henry VIII and was named Lord Audley of Walden.

Audley made a fortune by helping Henry force through his divorce from Catherine of Aragon, and later, to dissolve the monasteries. Along the way, Audley developed a knack of acquiring property. Lots of property. At the time of his death he was the third richest man in the kingdom.

His table tomb is fairly restrained, given his wealth. It is made of black Belgian slate known as 'touch', and is decorated with fanciful heraldic symbols. His character is perhaps best summed up by the contemporary comment that 'his soul was as black as the marble of his tomb, and his heart as hard'.

Also in the north chapel is a touching monument to two sons of the 3rd Lord Braybrooke, who died within a week of each other while fighting in the Crimean War. Beneath this memorial is another to the 7th Lord, who lost both sons in WWII. Above the south chapel screen are a striking set of trumpet tubes for the organ. These pipes are known as a Trompeta Real (Royal Trumpet) and serve to direct the sound of the organ down the church. 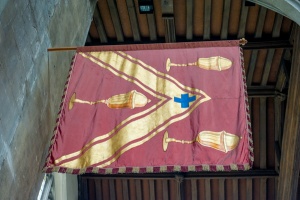 The only piece of medieval glass in the church is a small medallion in the west window of the south aisle. This is thought to represent Henry VI, or possibly even his queen, Margaret. Over the tower arch is a royal coat of arms to Charles II, dated 1660, and at the south side of the nave is a 15th-century parish chest.

Another interior highlight is the font, late 15th century in date, with lovely Perpendicular carving. The south porch features a finely carved 15th-century fan-vaulted ceiling, and the fragmentary remains of a medieval alabaster reredos.

Thomas Turner was a local man who once became lost in the woods after dark. He heard the bells of St Mary's ring out, and he followed the sound to safety. In gratitude, he left money in his will to the church. His gift is recalled each year in the last Saturday in June when the bells are sounded on what is known locally as Great Ringing Day.

Facing onto the north side of the churchyard is an extremely attractive 15th-century timber-framed building, thought to be a verger's cottage.

St Mary's truly is a lovely church. Walking into the light-filled nave is a wonderful experience, and the magnificent Perpendicular arcades are really a work of art. 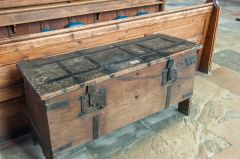 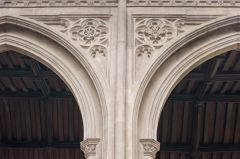 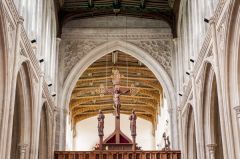 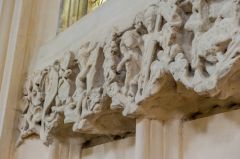 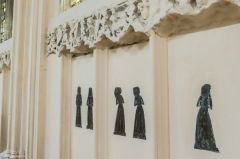 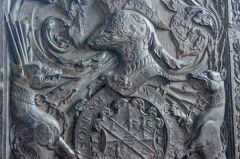 More self catering near Saffron Walden