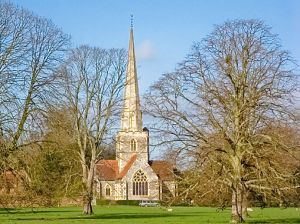 Shottesbrooke, St John's Church
There can be few medieval parish churches which exhibit more uniformity of style than St John's (more properly the Collegiate Church of St John the Baptist) at Shottesbrooke. The church stands in the grounds of Shottesbrooke Park manor and was built by the lord of Shottesbrooke estate, Sir William Trussell, in 1337.

The church originally stood as part of an ecclesiastical college, supporting a small community of a warden, five chaplains, and a pair of clerks. The last vestige of the collegiate heritage of St John's is the small door in the south wall, which once led to a covered walk linking the church to the chaplain's residence a short distance away.

Several stories surround the building of the church. whether they are true or not, well, who can say? The tale goes that Sir Willliam was a wild character, much given to overindulgence in drink.

When at last he was brought to see the error of his ways (helped, no doubt, by the fact that his wife never ceased to scold him for his behaviour) he vowed to build a church to commemorate his changed ways.

There is no zealot so officious as a reformed sinner, so the saying goes, and so it proved with Sir William. He poured money into the building of St John's until he had created one of the finest Decorated churches in Berkshire, with a spire meant to emulate the famous spire of Salisbury Cathedral. Sir William wanted a weather vane to stand atop the spire.

No one was brave enough to mount the spire until the brazier who had built the vane said he would do it. This brazier, one Dicken Smith, was perhaps possessed of more bravery than sense. He mounted the spire, affixed the weather vane, then called for a mug of ale to be sent up so he could toast the king.

You can perhaps guess the rest; he quaffed the ale and raised his mug high to salute the king, lost his balance, and fell to the ground. He lived just long enough to utter a few groans, interpreted as "Oh, oh ...". Then the poor fellow died.

They buried him where he fell, at the foot of the tower, with a gravestone inscribed with his final words 'O. O.' The moss-covered stone slab can be found near the south transept, by the path.

Within this lovely building are several fine monuments, including the canopied tomb of the founder, Sir William Trussell, and his long-suffering wife, Lady Alice Trussell. The width of the tomb is greater than the transept, suggesting that the tomb was prebuilt, and transferred to the church after it was complete.

St John the Baptist at Shottesbrooke is one of the great medieval churches of Berkshire, a county with more than its share of fine historic churches.