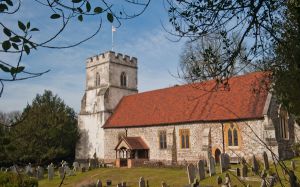 The first church at Medmenham was established about AD 650, possibly by Birinus, the 1st Bishop of Dorchester. This was replaced by the current building in 1160, under the patronage of Hugh II, Baron de Bolebec of Bucks. Baron Hugh also founded Medmenham Abbey at the same time.

The scanty remains of the abbey lie near the river and have been incorporated into a later Jacobean mansion. This mansion house was rebuilt in the 18th century by Sir Francis Dashwood, who used it to hold meetings of his notorious Hell Fire Club.

The bulk of the church is 12th century, with the tower and chancel a product of the late 14th century. One interesting feature of the existing church structure is the north chapel, built as a chantry by Isobel de Bolebec II, Hugh's heiress. Isobel was the widow of Robert de Vere, the 3rd Earl of Oxford.

Isobel granted the monks of her father's abbey the advowson and estate of the church, and about one-sixth of the manor, and reserved a right of access to the chapel from her manor house, through church land. There would originally have been an altar in the chantry, where prayers were said for Isobel's soul, her family, parents, kinsfolk, and the King.

The first known chantry priest was Guilleman, a hermit of the Order of St William, who then lived at The Hermitage in what is now Gillmans Wood. The similarity in the names suggests that the wood was named for the hermit. The same Guilleman was chaplain to the Bolebec household.

Aside from the chantry, the most notable features of Medmenham's church are the royal coat of arms to Queen Anne, set upon the north wall, and a small painted memorial to Anne Danvers, dated 1677. One more modern, and rather intriguing, feature, is a stained glass window on the south wall of the chancel.

This is a two-light window, with one panel depicting Kynegils, King of Wessex from AD 611-643, and the other depicting Birinus, who we mentioned earlier. He was the 1st Bishop of Dorchester and served from AD 635-650. I won't say that these stained glass windows are unique, but I don't recall seeing any windows dedicated to these early Saxon figures in any other church.

When you visit the church, spare a glance for the Dog and Badger inn, located across the A4155. The inn was built in the 13th century, at the same time as the abbey. It was rebuilt in 1590 and remodelled once again by the Hell Fire Club in 1860. 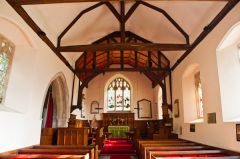 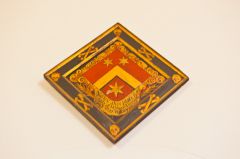