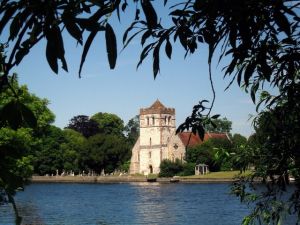 Bisham, All Saints Church
The village of Bisham stands on the south bank of the Thames, across from Marlow-on-Thames. On a rise above the river stands the ancient church of Al Saints, which dates to the 12th century.

The oldest and most interesting part of this Grade-II listed church is the tower, which really ought to be viewed from the Thames Path across the river to be fully appreciated. The rest of the church has been rebuilt several times, especially under Benjamin Ferrey in 1844.

The most interesting feature is the Hoby Chapel, which features a series of wonderful 16th and 17th-century memorials. Among the earliest is that of Sir Thomas Hoby (d. 1568) and his wife, depicting the couple in a reclining pose. This is the first known use of a reclining pose in funerary effigies in post-medieval England.

Compare this to the memorial of Lady Elizabeth Russell and Lord John Russell (d. 1584) who are shown in a more traditional Elizabethan and Jacobean pose; depicted at prayer, facing each other in a kneeling position.

There are numerous other memorials of interest, including Sir Philip Hoby (d. 1558). Most of the memorials are very well carved and are painted, with traces of gilding. Sir Philip and Sir Thomas Hoby are both shown with a hobby hawk at their feet. This is probably a pun on the family name, which is pronounced like 'hobby'.

The canopied tomb of Lady Margaret Hoby is a gem. Lady Hoby is shown with the children of her two marriages. Her effigy faces that of her daughter Anne, Countess of Warwick. Behind her are the likenesses of two sons, one of whom, Sir Thomas Postumous Hoby, was the model for Shakespeare's Malvolio, or 'Sir Andrew Ague-cheek', in the play Twelfth Night. Sir Thomas' peculiar middle name is due to the fact that he was born after his father's untimely death.

Lady Margaret was said to be a strict disciplinarian. The story goes that she beat her nephew, Sir Francis Bacon, for blotting his copybook. There may be some truth to the tale, as copybooks with ink-blots were found during repairs at Bisham Abbey, Lady Margaret's home. Lady Margaret herself is said to haunt the abbey.

One other feature of interest in the chapel is the lovely heraldic glass in the windows. This is not stained glass as we know it; rather, it is made with an enamelling process and dates to 1609. Also of interest are 16th-century memorial brasses to Thomas Crekett and John Brinkhurst. The former was a fishmonger in London, the latter a mercer in the same city.

The church stands near the site of both Bisham Abbey and Bisham Priory. The priory was established by the Augustinian order in the 14th century. It was demolished at the Reformation and no traces remain. The Abbey is a manor house that was once home to the Earl of Salisbury and is now at the heart of a National Sports Centre complex.

More self catering near Bisham, All Saints Church >>

More bed and breakfasts near Bisham, All Saints Church >>