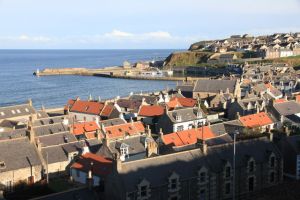 Cullen
A picturesque seaside town and former royal burgh, it seems likely that a royal castle existed here in the medieval period. It is quite possible that Elizabeth, the second wife of Robert the Bruce, died here in 1327, as shortly afterwards King Robert endowed the local church with a chaplain whose job was to pray for her soul. The first known royal charter was granted by James II in 1455.

Glorious white sandy beaches stretch away from the harbour to the north and west, along the curve of Cullen Bay. The coastline is dotted with wonderful rock formations, many boasting intriguing names like Bow Fiddle, Boar Crag, and the Three Kings. The sands are traditionally said to 'sing', though a strong imagination helps.

Much of modern Cullen is the result of a careful Victorian plan to replace the jumble of the old royal burgh with a regular street layout. The 'new' Cullen was made necessary when the owners of Cullen House decided to renovate the house and wanted to use the old village for their parkland.

Cullen House was once the home of the Ogilvies, whose ruined castle of Findlater clings to the cliffs a few miles to the east. The house dates to 1543, with early 18th century additions.

The most interesting historic building in the village is Cullen Old Kirk, an 11th-century church boasting some extremely fine funeral monuments. Further east along the coast are a pair of promontory forts at Green Castle and Crathie Point.

More self catering near Cullen >>

More bed and breakfasts near Cullen >> 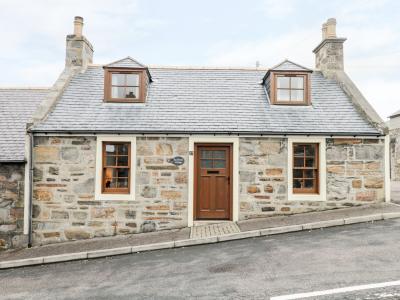 This semi-detached ex fisherman's cottage rests in the village of Cullen, near Elgin, and can sleep four people in three bedrooms.
Sleeps 4 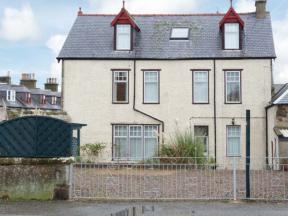