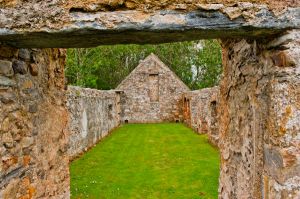 A ruined late medieval church standing beside the Burn of Deskford in a quiet area of Moray countryside. The architectural style is a good example of that traditionally found throughout north-east Scotland.

The highlight of the roofless church is a small sacrament house with beautifully carved decoration. The sacrament house is set against the north wall, near the east end of the church.

It was built in 1551 by Alexander Ogilvie, Laird of Deskford and Findlater. The arms of Ogilvie and his wife Elizabeth (nee Gordon) are carved above a dedication inscription.

The inscription reads 'This pnt [present] loveable work of Sacrament house maid to ye honor and loving of God be ane noble man Alexander Ogilvy of yat ilk, Elizabet Gordon his spous the yeir of God 1551'.

The text that decorates the recess sill is from the 6th chapter of the gospel of St John, and translates from the Latin as 'I am the living bread which came down from Heaven. If any man eat of this he shall live forever'. Above this is a line from Chapter 29 of Genesis, 'thou art my bone and my flesh'.

The design is so similar to the sacrament house at nearby Cullen that they may well have been crafted by the same artisan. The entire sacrament house is now behind a plexiglass cover to protect it from the effects of weathering. Despite the plexiglass shield, which does make viewing the carving more difficult, you can easily see enough to be impressed by the craftsmanship and detail of the carving.

On the north wall of the church is a small oval panel erected in memory of Walter Ogilvy. The Latin text reads 'Mr Walter Ogilvy, a pious minister of the work of God, now one of the happy inhabitants of heaven, died 15 February 1658.' 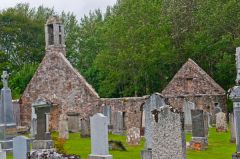 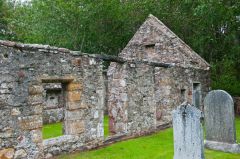 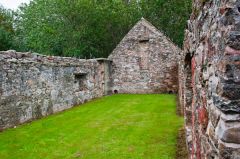 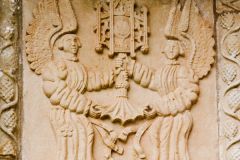 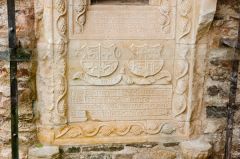 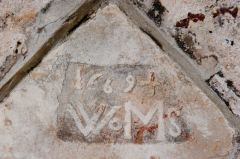 More self catering near Deskford Church >>