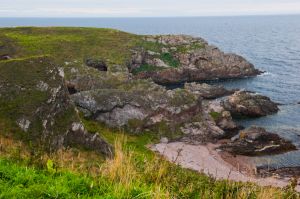 Green Castle
An Iron Age fort later used by the Picts. Remains of the fort at Green Castle are fairly scanty, consisting mainly of a low turf bank that has been worn away in places. The north coast of Grampian offered ancient settlers several easily defensible locations to build settlements or enclosed forts, such as that at Cullykhan or the famous fort at Burghead.

The high cliffs surrounding Portknockie harbour offered another possibility. The promontory stands to the west of Portknockie harbour, a short walk from the famous formation known as Bow Fiddle Rock. The clifftop site was occupied from as early as 1000 BC up to the coming of the Vikings around 1000 AD.

The bank encloses an inner area of about 70 metres by 15 metres. Archaeological work has revealed that there was a wooden stockade here during the Iron Age, which the Picts later replaced with a much stronger palisade wall of timber logs. The walls were burned at some time in the past, presumably in an invasion, though we do not know when, or by who.

The excavated walls have since been reburied, so there is really very little to see at Green Castle. The real star of the show is the scenery; Portknockie is one of my favourite places along the Grampian coast, with marvellous landscape.

The signposted Moray Coastal Path passes beside Green Castle, and there is easy parking on any of the streets leading down to the harbour.

Crathie Point Promontory Fort is about four miles away along the coast, close to the historic Findlater Castle ruins.

More self catering near Green Castle >>

This semi-detached cottage in Portknockie sleeps up to eight people in three bedrooms.
Sleeps 8 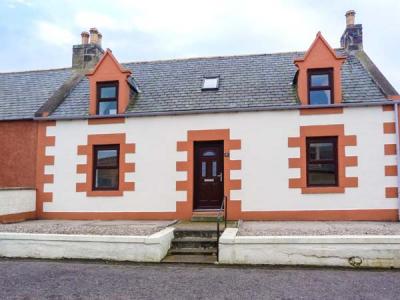