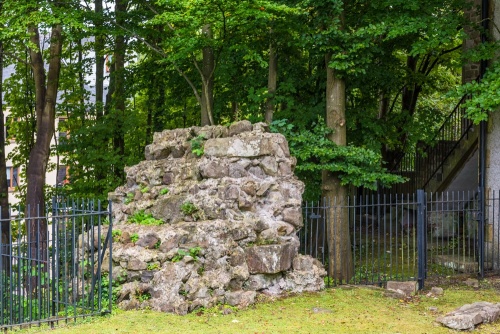 Wery Wall
A small section of Roman wall survives on the slope below Lancaster Castle. The wall is near the rear of Mitre House and is thought to have been part of the last Roman fort on the site, erected some time in the 4th century, probably around AD 330. What we see today is the core of the wall, as all the facing stones have disappeared.

Only four meters of walling remains, up to three metres high, on a north/south alignment running along a steep bank. The wall is thought to have been part of an external bastion, connected to the main fort wall.

The first fort on this site may date to as early as AD 80, but this was rebuilt on at least six occasions over the ensuing centuries until the last fort was abandoned in the early 5th century. The final rebuilding took place in AD 367 when the fort was contracted in size as a typical Saxon Shore type of defensive enclosure encompassing 9 acres. 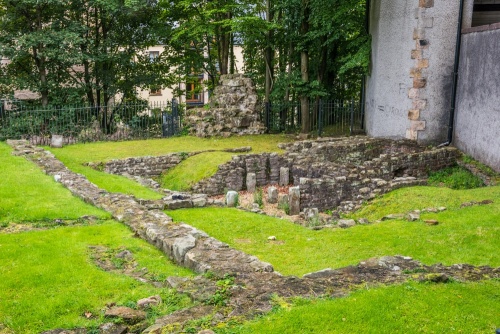 There is also an obvious earthwork rampart in Vicarage Field that follows closely the foundations of the Roman fort, but the earthwork is not, in fact, Roman. It is probably of medieval date and associated with either the castle or Lancaster Priory church.

Next to the wall are the foundations of a small Roman bath house, uncovered in 1973. The bath house formed part of a large courtyard house. This was thought to be the Praetorium, or official residence for the commanding officer of the 3rd-century fort. 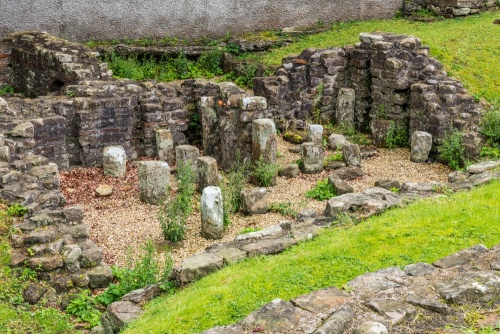 The Bath House and pilae stones for underfloor heating

Another theory suggests that the bath house was part of a mansio, a form of hotel. Archaeologists found evidence of painted plaster that was remodelled several times, the last time around AD 330. It was around that time that the Wery Wall and ditch were erected over and through earlier chambers. Remains of another bath house have been found near Mitre House, on the hillside above.

It is very easy to find the Wery Wall. A footpath leads from the west end of Lancaster Priory down the slope of Castle Hill towards St George's Quay. A signed trail leads off to the right into Vicarage Field where you will see the wall and bath house ahead. Good footwear is advisable in wet weather (I speak from sad experience!).

More self catering near Wery Wall and Roman Bath House >> 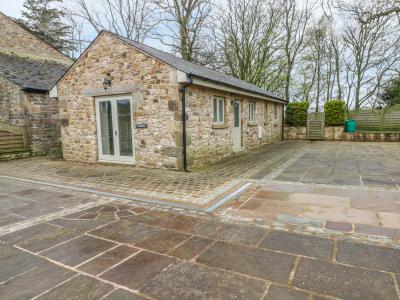 Detached, single storey cottage set near Lancaster, it can sleep two people in one bedroom.
Sleeps 2 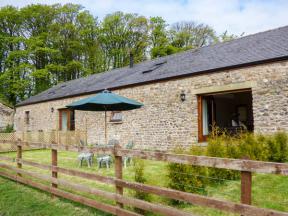 A wonderful, mid-terrace barn conversion near the River Lune, three miles from Lancaster, with three bedrooms accommodating up to six people.
Sleeps 6