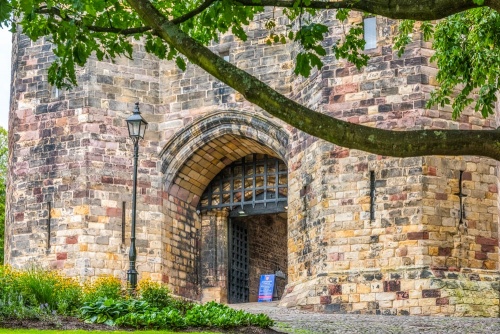 There was a Saxon timber fort atop a mound here when William the Conqueror granted Lancaster to Roger de Poitou. Roger rebuilt the castle mound in Norman style sometime around 1093. At the same time, he established a monastery, which lives on as Lancaster Priory, located immediately behind the castle.

When Roger de Poitou took part in the ill-fated Barons Rebellion of 1102, Henry I seized his Lancashire estates and gave them to his nephew Stephen of Blois (later to become King Stephen).

Henry may have begun the Great Keep, or that may have been the work of King Stephen, who succeeded him, or even of King David of Scotland, who administered Lancashire during Stephen's long struggle with Queen Maud known as The Anarchy.

The Great Keep stands four storeys high and is built with walls 3m thick. It has two rooms on each floor and offered accommodation for the constable of the castle or his lord. There was enough space that the entire garrison could withdraw into the keep if the castle was under siege. The massive construction meant that the keep needed strong buttresses to keep the structure from collapsing under its own weight. There are buttresses at each corner and halfway along each side. 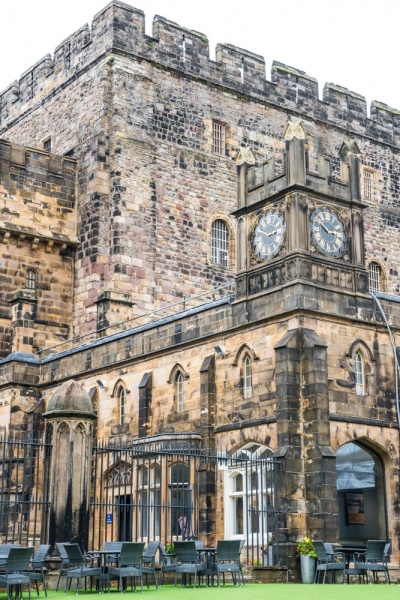 Sometime around the end of the 12th century, a stone curtain wall was erected to encircle the keep. Towers were built at regular intervals along the wall.

King John strengthened the castle with the addition of a defensive outer ditch and improved the King's Lodgings. He also built Adrian's Tower, so named because local residents incorrectly thought it had its origins in the reign of the Roman Emperor Hadrian. The Dungeon Tower was added in the mid-13th century and the Well Tower in the following century. The latter is named for two wells in its basement.

These defences proved inadequate when Robert Bruce attacked Lancaster in 1322, and the damage done by Bruce means that no trace of Saxon stonework is visible above foundation level. The castle was badly damaged in another Scottish raid in 1389. 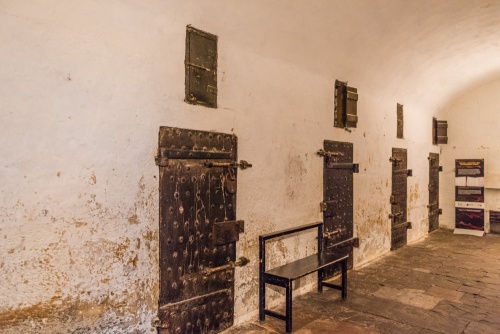 A corridor of the historical gaol cells

The castle was owned by the crown until 1399 when it became a permanent part of the Duchy of Lancaster. Henry Bolingbroke, Duke of Lancaster, built the imposing gatehouse that is the castle's most impressive feature in that year. The gatehouse features two semi-octagonal battlemented towers flanking an arched entrance with a portcullis. The gatehouse is named for Henry's father John of Gaunt.

The centre for administering the Duchy was established at Lancaster Castle, with courts, gaols, and judicial offices.

The castle was strengthened when the threat of a Spanish invasion loomed in 1585. It changed hands several times during the Civil War and was eventually ordered destroyed by Parliament. This was carried out, but the parts of the castle used for the gaol and courts were spared. 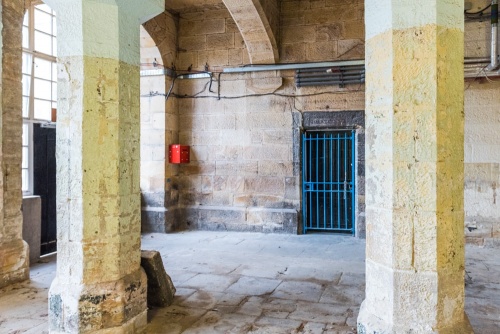 Lancaster Castle has been used to hold and try criminals since the 12th century. An assizes court was recorded in 1166 and we know that there was a gaol here by at least 1196. Around the same time, a group of local knights were appointed as Keepers of the Peace. The Keepers eventually became Justices of the Peace, who held quarterly sessions at the castle where they tried minor crimes.

More serious crimes were heard at bi-annual assizes courts. The long time between assizes meant that prisoners could be held for as much as six months in the gaol until the next assizes were held. The castle maintained this dual function of a defensive stronghold and a centre for administering justice throughout the medieval period. Executions were initially carried out at Tiburn on Lancaster Moor, not at the Castle itself. 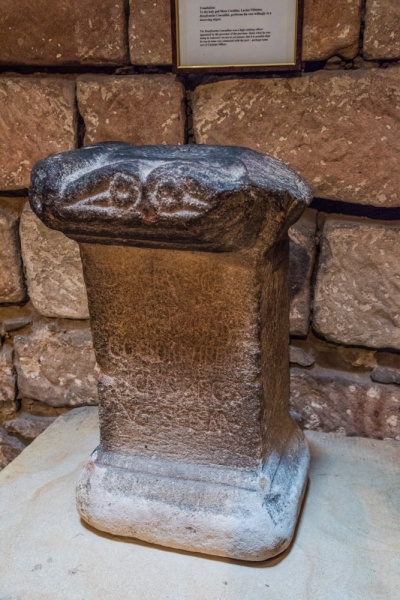 A Roman tombstone found near the castle

With such a long history as a gaol and court, it is not surprising that several celebrated cases were heard at Lancaster Castle. The most famous by far is the trial of the Pendle Witches in 1612. In that year 10 men and women from Pendle were convicted of witchcraft and hanged on gallows erected on the nearby moor. The trial became so well known because the Clerk of the Court, Thomas Potts, left detailed records, so that today we can read the chilling testimony and convictions.

The case centred on accusations and counter-accusations of witchcraft amongst three families from Pendle. The case arose just 8 years after King James had the Witchcraft Act of Parliament passed, which made it punishable by death to 'make covenant with an evil spirit, use a corpse for magic, hurt life or limb, procure love or injure cattle by means of charms'.

More seriously, the Pendle 'witches' were accused of conspiring to blow up Lancaster Castle and kill the Keeper. This came just seven years after the Gunpowder Plot, when a very real attempt had been made to blow up Parliament and the king. Though the charge may well have been trumped up, it resulted in a verdict of guilty and the death penalty for two men and eight women.

During the religious turmoil of the Protestant Reformation, 11 Catholic priests and four laymen were tried and executed at Lancaster Castle.

In the aftermath of the Civil War, the castle ceased to serve a military function and was used solely as a gaol and courthouse. The Gatehouse was used to hold debtors, who were generally kept in gaol until their debts were paid. A prison inspector in the 18th century reported that the debtors' area was like a 'somewhat noisy tavern'.

Another group held in the castle gaol were Quakers, who refused to swear an oath of allegiance to the king. The most prominent was George Fox, the founder of Quakerism. Though no Quakers were executed for their religious views, several died in prison. 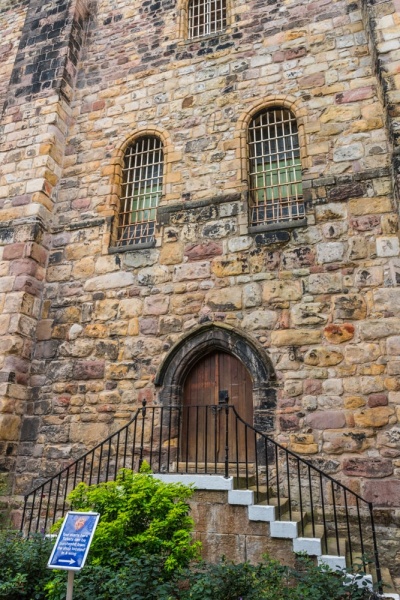 A Gaoler's House was built between the Gatehouse and the Well Tower in 1788. In 1790 separate prisons were erected for male and female inmates and a new shire hall and crown court. By 1801 executions were no longer carried out on Lancaster Moor but in the 'hanging corner' of the castle, near the churchyard.

The prison closed in 1916 but was then reopened to hold German prisoners during WWI. The military took over during WWII but by the 1950s the prison had reopened, only to close once more in 2011.

Visitors are welcome in the castle courtyard without a fee, but the only way to explore the castle buildings is by way of a guided tour. We took one of the tours and found it excellent. The guide was informative and extremely knowledgeable. Unfortunately, we weren't allowed to photograph in certain areas of the castle, including the stunning Georgian courtroom.

More self catering near Lancaster Castle >> 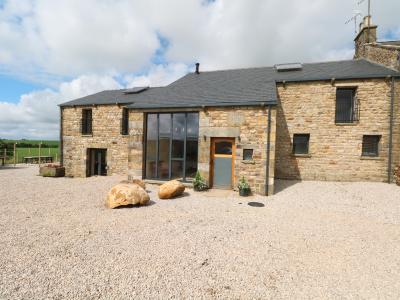 Bowland Barn is a gorgeous, contemporary barn conversion resting in Ellel near Lancaster, Lancashire and can sleep 13 people in six bedrooms.
Sleeps 13 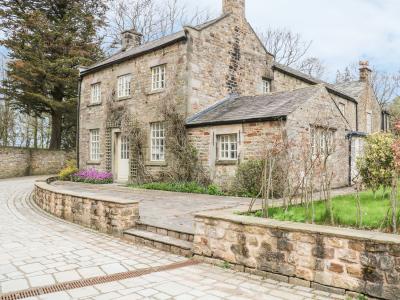