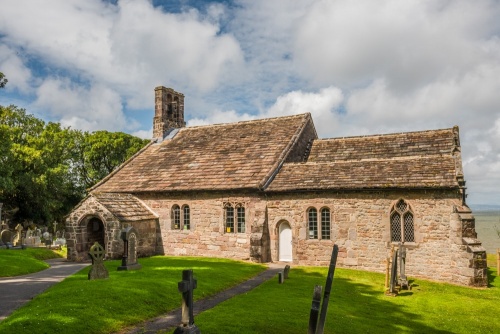 St Peter's Church in the Lancashire village of Heysham is one of the oldest places of Christian worship in Western Europe. It celebrated its official millennial anniversary in 1967, making it now over 1050 years old.

There has been a church at Heysham, on the cliffs overlooking Morecambe Bay, since at least the 8th century. Even that may not be the earliest Christian presence in Heysham, for legend has it that the 5th-century missionary St Patrick was shipwrecked off Heysham and built a chapel on the cliffs.

That 5th-century building was rebuilt in stone in the 8th century and again in the 10th century. You can see the chapel's roofless remains just beyond the top of the churchyard. It is entirely likely that the church and chapel were built at the same time, which would push the church origins back to at least the 8th century. There is a possibility that there was a timber church on this spot before that. 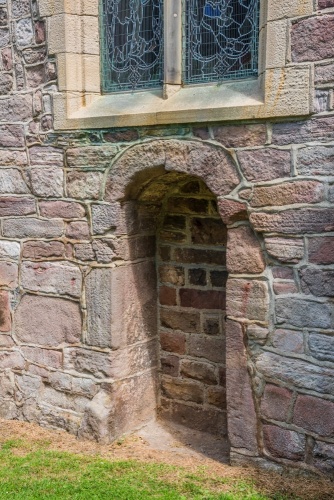 St Peter's church probably dates to sometime around 1000 AD. You can still see Saxon stonework in the church walls, particularly at the west end of the nave. The Saxon west door is intact, though now blocked. It is best seen from the outside, directly under the west window.

By contrast, the chancel dates to the 14th century, and the south aisle to a century later. Set into the west wall of the south aisle is an Anglo-Saxon window, and a door of similar date is in the aisle wall. These were almost certainly moved to the aisle from elsewhere during cone of the church's rebuilding phases.

The chancel arch was probably inserted in the 17th century but the stone above it is Saxon and there is cablework decoration that may be a 17th-century copy of original Saxon decorative carving. Under the chancel arch is a wooden screen dating to the 15th century. It is much restored and has been cut down from a larger screen.

The font is made of red sandstone and appears to be of 15th-century date. It is topped with a Jacobean cover. 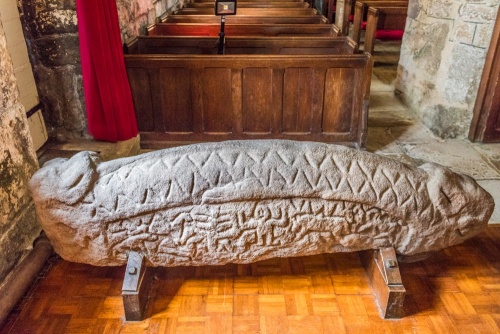 The highlight of St Peter's is a remarkably well-preserved Viking hogback stone dating to the 10th century - probably sometime around AD 950. The stone is shaped like a house with a tiled roof, supported by four small human figures and held together by figures of bears at each end.

Both sides of the stone are carved with figures representing scenes from Norse mythology. The shape is thought to represent the traditional shape of a Viking hall.

One side tells the legend of Sigmund, while the other side shows Sigurd, who famously slew the dragon Fafnir. You can make out the figure of Fafnir, looking rather like a sea monster, whose tail disappears under the stone, wraps around, and reappears by Fafnir's mouth. 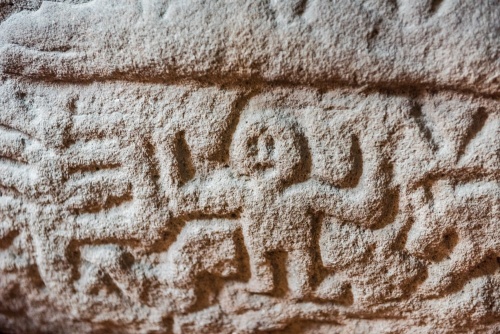 The figure of Sigurd on the Viking hogback stone

Though worn by the passage of time and weathering, the carving is wonderfully vivid. You can clearly see Yggdrasil, the tree of life, two snakes, birds, Sigurd's horse Grani, four birds, and two horses as well as other unidentified creatures and symbols.

Some of the symbols - such as a small three-leafed clover - may be Christian, suggesting that the Vikings were in a period of transition between old pagan beliefs and the rising influence of Christianity. They were clinging to the old ways but starting to use new, Christian symbols.

The hogback stone was found buried in the churchyard in the 19th century. It was moved inside the church in the 1920s to protect it from weathering. It now sits on a plinth at the eastern end of the south aisle. It is considered perhaps the finest Viking tomb in Britain. 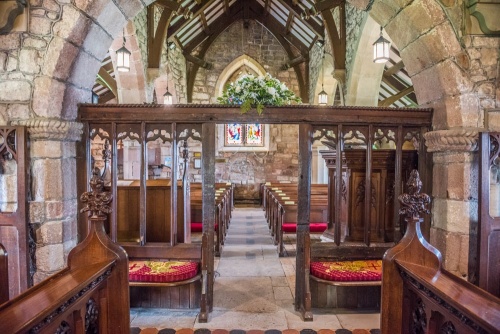 Set into the church wall are two pieces of a chalice discovered in the tomb of a Norman rector buried under the north-east wall of the chancel. The rector was probably the man who founded the Norman part of the church. His stone coffin lies beside the churchyard path.

At the west end of the north aisle is a floriated grave slab dating to the 13th century. Look for the finely carved broadsword lying parallel to the cross shaft. Also set against the wall are several old coffin lids and gravestones including the gravestone of a 17th-century vicar.

Near the churchyard entrance is the stump of a 9th-century Anglo-Saxon high cross. Two sides are carved with scrolled foliage but the north side depicts a figure standing inside a building with a doorway and seven windows. The figure is thought to represent Lazarus. The south face of the cross shows a human figure beneath a halo that may depict Christ holding a book.

Near the churchyard path stands a large sundial shaft bearing the carved date of 1696. The shaft is carved from a single piece of sandstone and is set into a stepped base.

In the south-west corner of the churchyard is the old north doorway, which was removed when the north aisle was torn down. It is hard not to notice how much the doorway resembles the surviving doorway of St Patrick's Chapel, on the clifftop just beyond the churchyard. 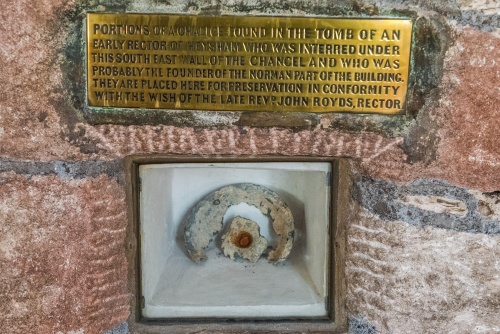 Heysham is on the A589 immediately south of Morecambe. There is a large village car park on Smithy Lane, at the southern end of the village. From the car park, walk up Barrows Lane, past the heritage centre, and turn left on Main Street and follow it until you see the churchyard entrance on your left.

The church has regular opening times and was open when we visited but we highly recommend checking the official church website for current days and times. 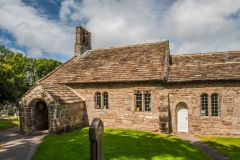 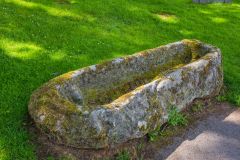 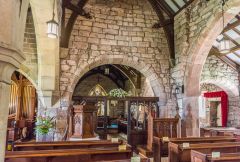 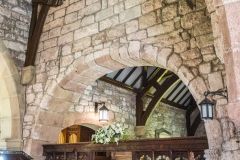