HERITAGE HIGHLIGHTS:   The museum is housed in one of the oldest domestic buildings in England 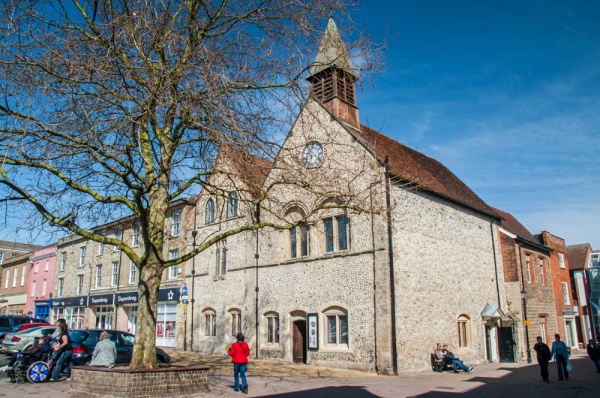 A Grade I listed building, Moyses Hall was a merchant's house, built around 1180, which makes it one of the oldest domestic buildings in England still in use, and a rare surviving example of Norman domestic architecture. The oldest parts of the Hall are the south and west walls, which are original 12th-century construction, while most of the remainder is Tudor, with some Victorian restoration. 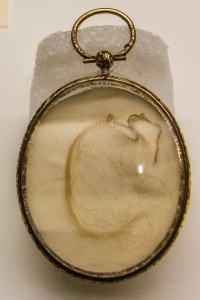 A lock of Mary Tudor's hair

The name 'Moyses' refers to a long-held belief that the Hall was built by a Jewish merchant, or served as a synagogue, but a more likely tale is that it was erected as a dwelling for scholars associated with the Abbey, and as a part-time pilgrim's hostelry.

The house was built with a first-floor hall and solar, or private family chamber. The ground floor was used for business premises and storage. It is built in two sections, each with a gabled frontage looking onto the street.

The most obvious Norman features are the ground floor windows, but these are, in fact, Victorian inserts and are not original. Two first floor windows are original, however. There is a clock turret, but this was added by famed Victorian architect George Gilbert Scott during a 19th Century remodelling.

Over its long life, Moyses Hall has seen use as a dwelling, an inn, a gaol, and a police station, before becoming the home to a museum of local life. The museum features collections of clocks and watches finds from the Abbey, clothing and textiles, prints, paintings, displays on the Suffolk Regiment, and other aspects of local heritage.

There is even a locket containing the hair of Mary Tudor, sister of Henry VIII, who is buried at St Mary's church. There is a special display on the Red Barn Murder, a local crime which was a huge scandal in the 1820s.

Moyses Hall is one of several historic buildings clustered around Cornhill and Buttermarket (others including the Art Gallery, designed by Robert Adam, and the Victorian Corn Market).

The Hall is very easy to find, standing at the west end of Buttermarket. It is well signposted for pedestrians. There is no easy on-street parking, but there are several pay and display car parks within 5-10 minutes easy walking distance. 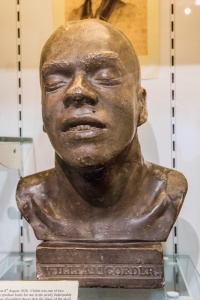 You enter the building into an atmospheric vaulted chamber, supported on large Norman pillars. We visited on a blistering hot summer day in June and found to our delight that the interior of the Hall was cool and comfortable; a welcome respite from the weather outside. The receptionist was extremely helpful and gave us a fascinating account of the Hall's history and how it developed as a museum. Opposite the reception area is a display on the Abbey and other medieval finds, including a huge broadsword found at the Battle of Fornham (1173).

Another highlight is a lock of Mary Tudor's hair. Mary was Henry VIII's favourite sister. she married Louis XIII of France and later married Charles Brandon, Duke of Suffolk. She was buried in the Abbey, then reinterred in St Mary's church after the Abbey was dissolved by her brother.

Also on the ground floor is a large exhibition devoted to Crime and Punishment. The highlight here is a display on the Red Barn Murder, with objects used during the murder investigation and memorabilia produced as 'souvenirs' that catered to the huge interest in the case.

The most unusual item is a plaster cast of William Corder's head. Corder was the man accused of murdering Maria Marten in 1827 as the couple prepared to elope from their village of Polstead to Ipswich. The cast of his head was made in support of the fashionable concept of phrenology, the theory that the shape of a person's skull could predict their behaviour and character.

One of the most interesting exhibits is a large display of historic clocks, from longcase clocks made locally to a set of superb 17th-century automaton clocks made in Augsburg, Germany.

Moyses Hall is like Dr Who's Tardis; it seems huge on the inside, much larger than you would imagine from the exterior. You think you've reached the end only to realise there's much more to explore. It seems fitting that there is a full-sized replica of the Tardis on the first-floor landing. 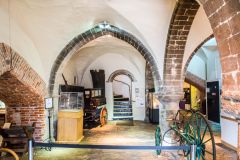 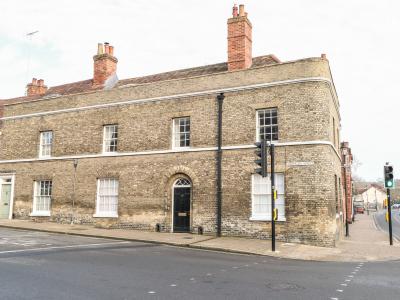