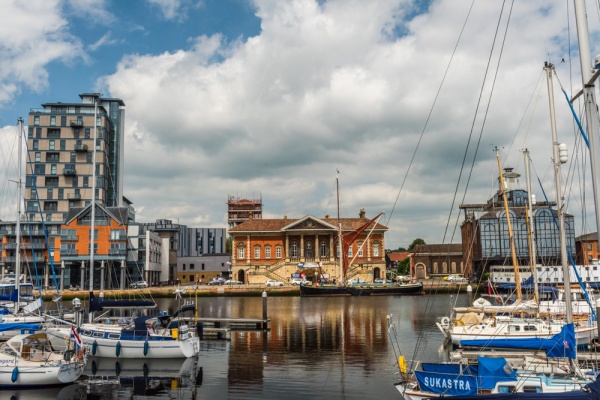 The Romans were active in the area, and established a large villa at Castle Hill, in the north-west area of modern Ipswich.

Ipswich was permanently settled in the 7th century as a trading port, taking advantage of the River Orwell's good navigation links to the sea. Its riverside location made it perfectly situated for ocean-going trade with Germany and overland trade within East Anglia.

During the Saxon period, it was a centre for weaving, and developed into a large and prosperous town, supporting its own mint. The very location that made Ipswich such a good trading port also made it vulnerable to Viking attack. The Danes occupied the town from AD 869 - 917.

The period of Danish rule did not stop Ipswich from growing, and by the time of the Domesday Book in 1086 the town had a population of over 3000, making it the 8th largest settlement in England. Ipswich was granted a royal charter in 1200, at a time when it was known as a centre for wool trading and leather manufacture. From the 13th century the town developed a thriving shipbuilding industry, and it had an annual fair, drawing people from all over East Anglia.

Two medieval priories were established in Ipswich, but when Henry VIII suppressed the monasteries the priories were closed. In 1549 Robert Withipoll built a large house called Christchurch Mansion on the site of an Augustinian priory.

The mansion was damaged by fire in the 17th century and rebuilt as a Jacobean stately home in red brick. It is now a popular museum, with fine art and furniture on display in the sumptuous period rooms. Christchurch Mansion holds the largest collection of paintings by John Constable outside London. 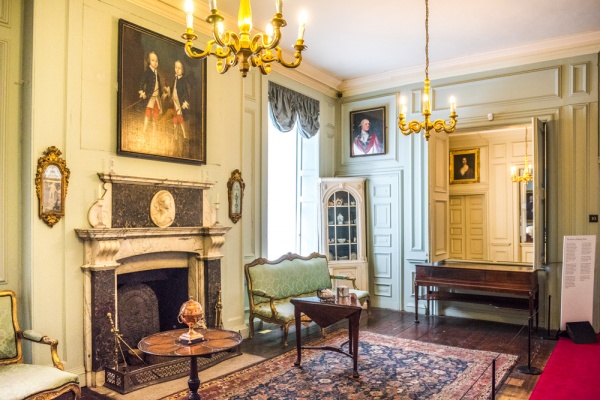 One of the galleries at Christchurch Mansion is named for Cardinal Thomas Wolsey, a native of Ipswich. Though Wolsey did not enjoy the best reputation elsewhere, in Ipswich he is regarded as the town's favourite son. A statue to Wolsey stands near the site of his birthplace, opposite a timber-framed inn on Silent Street.

By the 19th century, Ipswich was no longer an active international trading centre, but it still had an active role in coastal trade, and shipbuilding continued to be a major industry.

Despite its history as a centre for industry and trade - or maybe because of it, the core of town boasts a wealth of fascinating historic buildings. Perhaps the most spectacular of these is Ancient House on Buttermarket.

The house dates to the 14th century, and its exterior is embellished with astonishing pargeting, an ornate form of plasterwork, plus intricate woodcarving representing the continents of Asia, Africa, America, and Europe. The pargeting was added from 1567 by George Copping, a wealthy merchant. The Sparrow family purchased Ancient House in 1603, giving the building its alternate name of Sparrowes House.

The Sparrow family built a hidden chamber to serve as a Catholic chapel, and rumour says that Charles II hid in the chamber after his defeat at the Battle of Worcester in 1651. The story seems highly unlikely, for Ipswich is quite a distance from places Charles is known to have hidden after the battle. 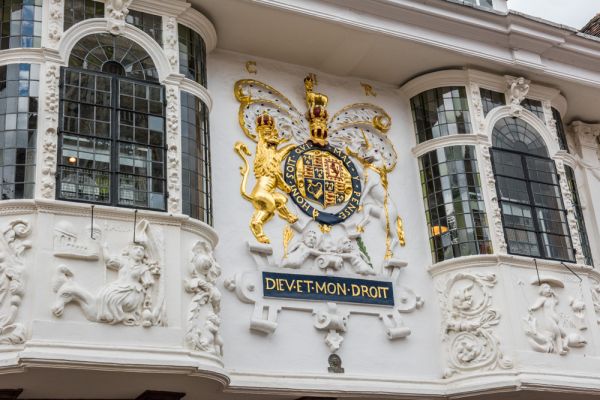 On the waterfront is the Old Custom House, built in 1845 and one of the best-preserved buildings on the waterfront. It was designed by John Clarke, a local architect who won a design competition. Its neo-classical facade looks more Queen Anne than Victorian, with a classical portico supported on 4 Tuscan columns set on a huge stone stair.

Near the Custom House is the medieval church of St Mary at the Quay, built in the late 15th century and one of 4 seafarer's churches in the town. St Mary's is now redundant and in the care of the Churches Conservation Trust.

St Peter's by the Waterfront

Also redundant is St Peter by the Waterfront, probably built on the site of the very earliest church in Ipswich. Edward I's daughter Margaret married John, Count of Holland here in 1297. Cardinal Wolsey seized St Peter's to act as his college chapel, but when Wolsey fell from power the church was returned to the parishioners.

The east end of the church is used for musical performances, while the west end is home to a heritage display on the church and the surrounding area. Look for the superb medieval font carved from Tournai marble. There is also a medieval stone coffin and the Knap Brass, a memorial brass to John Knapp (d. 1604), and his wife Martha. 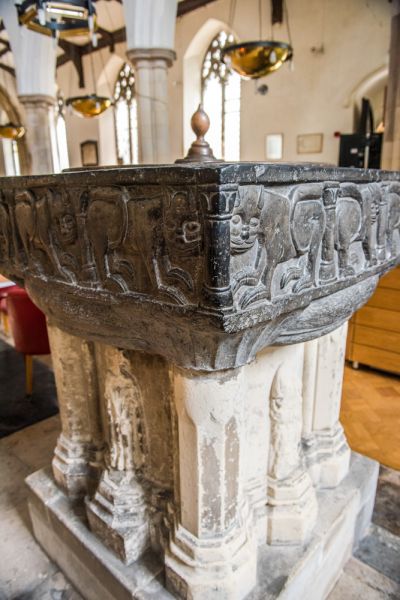 Outside St Peter's is Wolsey's Gate, the last remnant of Cardinal Wolsey's ambitious plan for a college built on the site of the Priory of SS Peter and Paul. The priory was abolished at Wolsey's behest, and the college begun. The gateway was built to act as a ceremonial entrance for guests arriving by water. Before the college itself could be built Wolsey fell spectacularly from grace. Construction was stopped, and building materials diverted to London were they were used to build the Palace of Whitehall. The only reminder of Wolsey's ambitious plan is the ceremonial gateway on College Street. 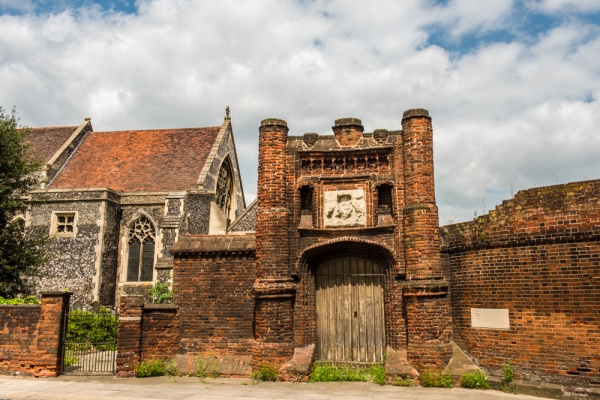 Pykenham was renting a neighbouring property from Holy Trinity Priory, but decided that his status demanded a more impressive dwelling. He created an imposing timber-framed gatehouse with wattle and daub infill, with a chamber over the gate to house a permanent gatekeeper. The Gate is now owned by the Ipswich Building Preservation Trust and is often open for the annual Heritage Open Day event. 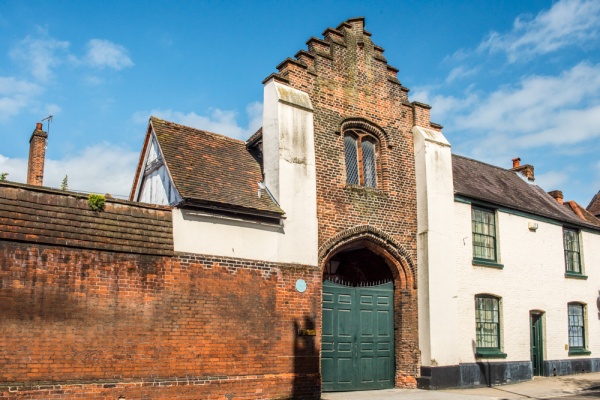 Not far from Pykenham's Gate is St Mary le Tower church, the largest and most impressive medieval church in Ipswich. St Mary le Tower was begun in the late Saxon period, and from 1177 it was served by the canons of Holy Trinity Priory. St Mary's has been the town's civic church since 1200. The impressively large church we see today is a complete rebuilding of the medieval church, commenced in 1860 on the foundations of the earlier building.

The result is a Victorian Gothic treasure; a magnificent example of Victorian architecture blended with medieval nave arcades and doorways. Historic highlights of the interior include a wonderful late medieval font decorated with lions and human heads. On the wall is a wooden memorial to William Smart (d. 1599) painted with a panoramic view of Ipswich at the time of his death. 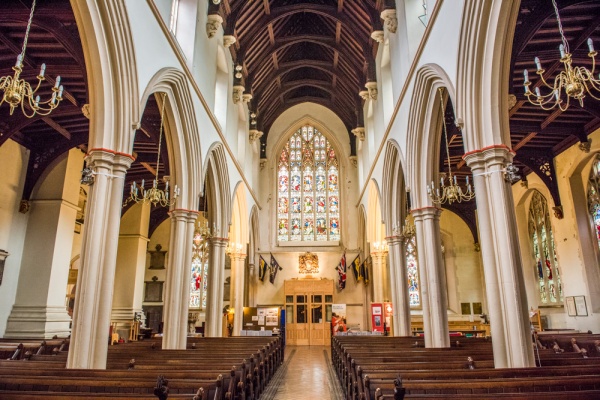 If St Mary le Tower is the jewel in the crown of Ipswich's historic churches then the Unitarian Meeting House on Friars Street is its hidden gem. Built in 1699 and hardly altered since, the Meeting House boasts a galleried interior and an ornate pulpit carved by Grinling Gibbons or one of his students. The Meeting House may have been designed by Gibbons' frequent employer, Sir Christopher Wren. 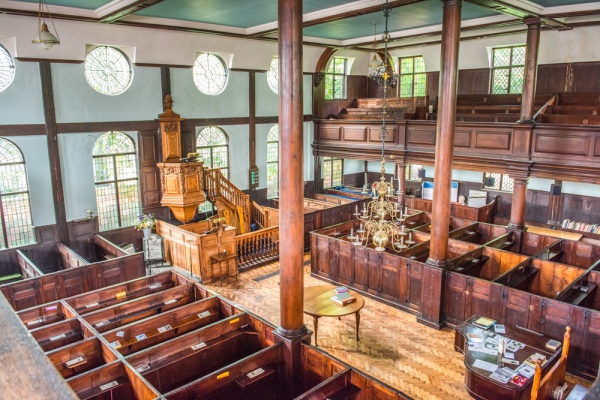 One of the most impressive Victorian buildings in Ipswich is the Town Hall, built in 1878 in ebullient Victorian style. The Town Hall and the neighbouring Corn Market now house a pair of art galleries and a theatre as well as a bar and coffee shop. Visitors can enjoy the glittering 19th-century function rooms, council chambers, and courtroom. 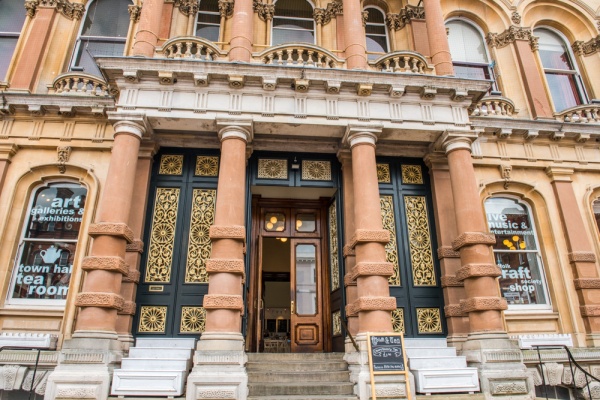 Learn more about Ipswich's history at the Ipswich Museum, housed in an impressive Victorian building on High Street. The museum hosts galleries devoted to Suffolk geology and wildlife, British mammals and birds, and a Victorian Natural History Gallery. One of the most popular exhibits in the museum is a life-sized model of a woolly mammoth. 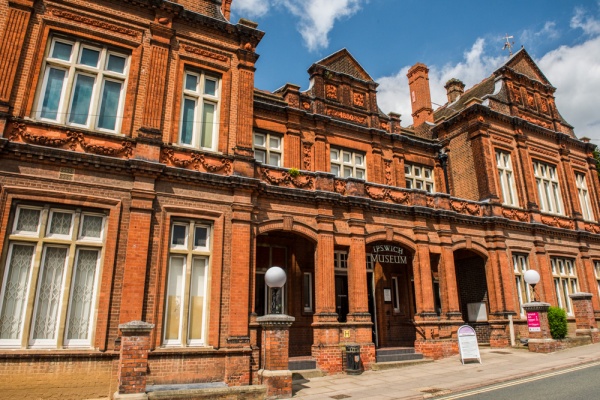 Ipswich is well served by major roads, and I highly recommend using the park and ride system. There are two park and ride stations, one at London Road, near the A12/A14 interchange, and the other at Martlesham, where the A12 meets the A1214. The historic core of the town is easy to explore on foot, and major visitor attractions are generally well signposted.

I spent a day wandering about Ipswich with the aid of a very useful heritage trail booklet, available locally, and enjoyed myself enormously. 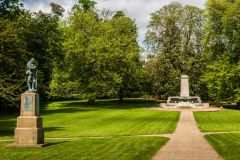 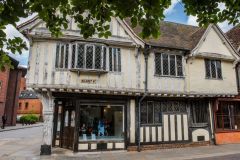 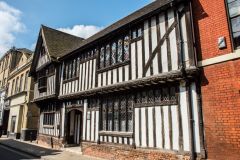 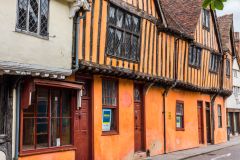 More self catering near Ipswich

More bed and breakfasts near Ipswich