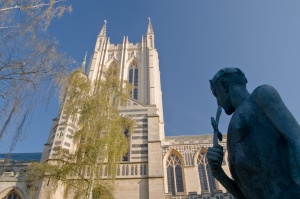 In a sense, this oldest and most revered of Suffolk churches owes its existence to a defeat in battle. Edmund, king of the East Angles, was defeated and killed by the Danes in 869.

Edmund was buried at Hoxne, but after miracles were reported at his tomb the king was canonized, and his body was moved to the monastery of Beodricksworth, which was renamed St Edmund's Bury in his honour. King Canute later made the monastery an abbey, and Edward the Confessor reinforced its status by granting it an estate which covered large portions of modern Suffolk.

A number of smaller churches were constructed within the abbey grounds. One of these churches was the pet project of Abbot Anselm. Anselm was unable to take a pilgrimage to the shrine of St James at Compostela, Spain, and instead built a church for pilgrims to the shrine of St Edmund, and dedicated it to St James. It is this church which was to become St Edmundsbury Cathedral.

Originally St James church served the residents of the north of Bury St Edmunds, as well as catering to pilgrims. 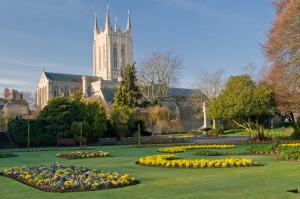 The cathedral from the gardens

The cathedral lies at the heart of a complex of historic buildings in the centre of Bury St Edmunds. Beside it to one side is the Norman Tower, an early 12th-century free-standing tower which acts a bell-tower for the cathedral.

On the other side is Abbeygate, a striking Gothic tower built in the 14th century, which acts as a gateway to the Abbey Gardens. Within the gardens lie the ruins of Bury St Edmunds Abbey, one of the richest and most influential monasteries in medieval England. The abbey was destroyed at the Reformation, but the cathedral church still stands.

The nave of the church was rebuilt in about 1503 by John Wastell, a local mason who also worked on King's College Chapel, Cambridge and the bell tower of Canterbury Cathedral. In 1914 the church was extended and raised to cathedral status. The abbey itself was largely demolished in the Dissolution of the Monasteries. 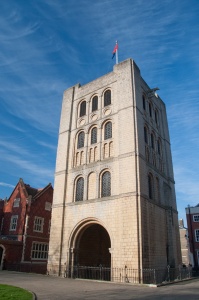 It is well worth visiting for the historic furnishings, not least of which is a superb medieval hammerbeam roof, ornamented with figures of 30 angels. The roof is boldly painted and gilded, and though ornate, is nothing like so ornate as the extraordinary font and font cover at the west end of the nave - a veritable riot of colour.

In the Edmund Chapel is an exquisite altarpiece, painted in Germany around 1510. By the high altar is the beautifully carved wooden 'cathedra', the bishop's seat which gives rise to our word 'cathedral'.

The Landing Gallery and Cloisters host a changing exhibition of art, and a display of church plate can be seen in the Treasury above the north transept. The cathedral has benefitted from a special Millenium Project, which allowed the building of a central lantern tower in emulation of Wastell's tower at Canterbury.

Outside the cathedral are gardens, planted with varieties of herbs and flowers known to have been used in the Middle Ages.

A short stroll along Angel Hill from the cathedral entrance is the parish church of St Mary's, which is every bit as worthwhile visiting from a historical perspective. 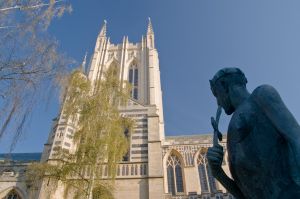