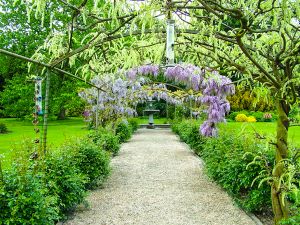 Glansevern Hall Gardens
An early 19th century listed house is set in 25 acres of gardens, with a grotto, glasshouse, rose gardens, lake and woodland walk, rock garden, and trees carefully laid out in landscaped grounds on the banks of the River Severn.
History
The Owen family is one of the most powerful - and most ancient - families in Wales. The Owens trace their history to at least 1165, when the illegitimate daughter of Lord Rhys of Deheubarh married Cadifor ap Dinawal, Lord of Castell Hywell.

In 1801 Sir Arthur Davies Owen called in architect Joseph Bromfield to create an ornate mansion house for him on the banks of the River Severn. Bromfield created a stunning mansion, one of the best examples of Greek revival style. The house still retains its 18th century Chinese wallpaper. The interiors boast medieval panelling brought from nearby churches at Llangurig and Montgomery.

What to See
The gardens were begun in 1805, while the house was still being built. Parkland sweeps down from the house in a series of terraces towards the River Severn below. Other garden features include a rock garden, a fantasy grotto, a walled kitchen garden, a folly, and orangery.

A trail loops around a 5-acre lake, crossing the upper end of the lake over a wrought-iron bridge. The trail passes through an area of mixed woodland, and through a water garden planted with water-loving plants such as candelabra primulas, hostas, and begonias. One highlight along the lakeside trail is a specially commissioned sculpture by Frances Carlile called Embarkation. Beside the river is a hide where you can watch for local bird-life, including resident kingfishers.

The Bathtub Lake
The lake has been called 'the biggest bathtub in Wales', and for good reason. When it was dredged and 200 years worth of silt removed, the owners found a huge oak plug at the very bottom, stopping the entrance to an oak drainpipe. The plug measured 18 inches across and was fitted with iron handles. And just like a bathtub plug, when it was removed, the lake did indeed drain.

Formal Gardens
Near the house the gardens are more formal, with herbaceous borders and carefully laid out garden beds. There is a Wisteria Fountain Walk, where the heavenly scent of wisteria wafts on the air in season. There is a Georgian orangery, herbaceous beds, and lush plantings of peonies.

The walled gardens are laid out as a series of themed 'rooms', and entered through a set of Ginkgo gates from the Georgian courtyard. The walled garden areas include a White Garden, Cutting Garden, and the Rose Garden. From the walled garden you pass to the Victorian Grotto and Rockery, first laid out in the 1840s. From here a path leads to the Folly Garden and Wildflower Meadow.