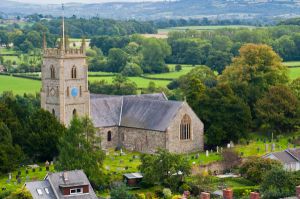 St Nicholas dates to the early 13th century, begun around 1226. The rood screen is original, with wonderfully carved 13th-century angels on top. The screen, choir stalls and misericords were brought to Montgomery from Chirbury Priory after the priory was dissolved by Henry VIII.

One of the interior highlights is the ornate tomb of Richard Herbert (d. 1593). Herbert was the lord of Montgomery Castle, and father of the poet and cleric George Herbert. Also buried here is Richard, 2nd Baron of Chirbury, who died in 1655 and was the last of the Herbert family to live at the castle.

In the churchyard is the grave of John Davies of Wrexham. Davies was convicted of highway robbery in 1821, though he protested his innocence. He is said to have prayed to God that no grass should grow on his grave for 100 years as a sign of his innocence.

Though he was executed, his prayers may have been answered, for it is said that no grass grew on his grave for well over a century. The 'Robber's Grave' can easily be seen in the churchyard - though it now has grass growing upon it! 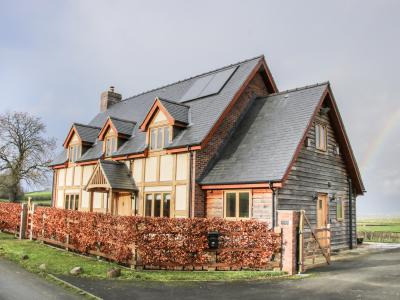 This detached cottage rests in Llandyssil, near Montgomery, in Wales and can sleep eight people in four bedrooms.
Sleeps 8

This lovely barn conversion on a small livestock farm is 4 miles from the village of Montgomery and can sleep eight people in four bedrooms.
Sleeps 8