BY DAVID ROSS, EDITOR
This is walking country and the peaks and valleys are crisscrossed by numerous waymarked trails. Well, not totally walker's country; they must share the Beacons with sheep, who vastly outnumber the humans here. Brecon Beacons National Park is an area of 519 square miles stretching from the English border. It takes in no less than 4 separate mountain ranges bonded by wide open green spaces and rolling hills.

The Brecon Beacons is famous for its waterfalls, caves, and gorges, the result of its millstone and limestone underpinnings being worn away by acidic rainwater leaching down from the peat uplands.

The caves provided refuge for early settlers in Britain and remains of New Stone Age settlements and burial chambers can be seen at Crickhowell, Talgarth, and Brecon. There are also stone circles, over 30 of them, scattered about the park.

The most popular walking destination is Pen y Fan, at 886m the highest point in the Beacons, but there are other good choices, including the Offa's Dyke Path through the Black Mountains, and the Sarn Helen Roman road in Fforest Fawr.

Other activities beyond walking include pony trekking, sailing, canoeing, caving, and canal cruising. The main visitor centre near Libanus has all the details. Other seasonal centres are located at Abergavenny, Brecon, Craig-y-nos Country Park, and Landovery.

What to see:
Brecon and Monmouthshire Canal: One of the most beautiful canals in Britain, stretching from Brecon to Newport. There are footpaths along the canal and the nearby Usk river.
Cathedral Showcaves: Guided tours of these glittering natural caverns run from Easter to October.
Llanthony Priory: 12th century ruins in a beautiful valley setting.
Mynydd Illtyd Mountain Centre: info centre for the park. There is a circular nature trail from the centre.
Craig y Nos Castle - a Victorian showpiece, home of a famous opera singer, Adelina Pati, and now a luxury hotel. The castle grounds have been transformed into a popular country park.
Cerrig Duon Stone Circle & Maen Mawr - A remarkable prehistoric complex of standing stones and long stone rows set in a remote and spectacular landscape.
Waterfall Country - the area around Ystradfellte boasts an extraordinary number of spectacular waterfalls, many of them linked by walking trails. See our overview of the famous Waterfalls Walk for more.
Ordnance Survey maps covering the Brecon Beacons:
Explorer OS maps (1: 25000) - best for walking
EX012 Brecon Beacons West & Centre - EX013 Brecon Beacons East 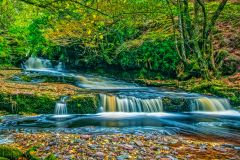 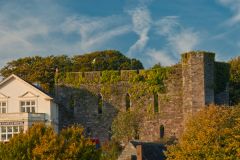 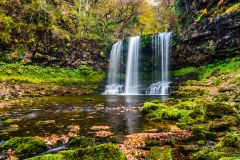 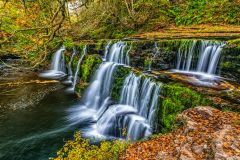 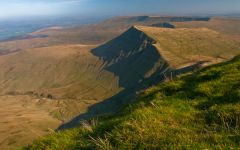