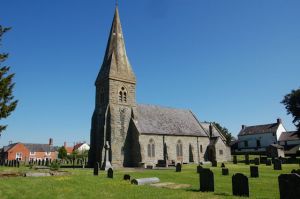 Castle Caereinion Castle stands in the churchyard
This motte and bailey castle which gives its name to the village of Castle Caereinion was begun in 1156 by Madog ap Maredudd, prince of Powys. Madog's nephew, Owain Cyfeiliog, allied himself with the Normans, and as a result the castle was seized by Lord Rhys and Owain Gwynedd in 1166.
They strengthened the castle structure but it did not help, for Owain Cyfeiliog and his Norman allies attacked Castle Caereinion and destroyed the fortifications, after which the site seems to have been abandoned.

Little remains now beyond the raised mound of the motte in a corner of the churchyard. The motte stands only 3 metres high, and is about 20 metres in diameter. A shallow depression to the south of the mound marks the likely site of the earthwork defences. The mound was built near the main route from Welshpool (now the A458).