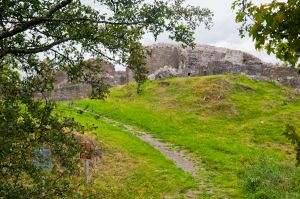 This secluded hilltop fortress was built c. 1273-77 by Llewelyn the Last. Until excavations in the 1980s nothing much was known about Dolforwyn, but now the remains of a substantial fortress have been laid bare. But there is more to Dolforwyn than just a castle; Llewelyn established a purpose-built town here, the forerunner of Newtown in the valley below.

Sometime around 1273 Llewelyn, who was recognised as Prince of Wales by Henry III, began building a fortress on a high ridge, with a planned borough beside it. Unusually, we have written records for the castle construction, which tell us that between 1273-4 the building cost £173 6s 8d, and the first castellan was Bleddyn ap Llewelyn.

Shortly afterwards, Llewelyn received news at Dolforwyn that his brother Dafydd had allied against him with a neighbouring lord, Gruffudd ap Gwenwynwyn. The two rebellious lords fled to the protection of Edward I, and Llewelyn siezed Gruffudd's lands.

Llewelyn was engaged to marry Eleanor, daughter of Simon de Montfort. Edward held Eleanor hostage and demanded that Llewelyn pay him homage. Llewelyn was enraged, and utterly refused to treat with the new king of England.

This was the pretext for the first of Edward's campaigns against Wales, and it was at Dolforwyn that the first blow fell. In 1277 Edward's force, led by Roger Mortimer of Montgomery, besieged the castle and burned the borough.

Some of the stone balls cast by Mortimer's siege engines can still be seen at the castle site. The Dolforwyn Castle garrison surrendered, and Edward granted the castle to Mortimer. He, in turn, did not bother to rebuild the settlement he had destroyed, but chose to build a new borough in the valley, which, in practical fashion, was named Newtown, for that's what it was!

Mortimer did, however, choose to maintain Dolforwyn as a fortress. The castle was briefly retaken in 1322, but regained by the Mortimers. By the late 14th century it had fallen into complete disrepair, and was never again to enter the stage of history. Today, the castle ruins include the remains of a circular tower at the north east end of the site, with a rectangular keep diagonally opposite at the south west, and curtain walls.

The tower is the largest of any known to have been built by a Welsh ruler. It was originally freestanding, but later renovations incorporated it into the walls. Similar round towers can be found at Ewloe and Dolbadarn. Most of the material is local sandstone, though the dressing stone was imported from Shropshire.

One interesting interior feature is a large circular recess in the north range, that you might at first take for a well. It is in fact a corn-drying kiln. There is a well, with a vaulted chamber over it. This was cut by the Mortimers, who delved down through the solid rock to a depth of at least 21 feet.

Note that access to the castle site is on foot only, and the hill is very steep. The reward for your climb is a superb view across the valley below.

Our Verdict: A fascinating small fortress in a wonderful location. 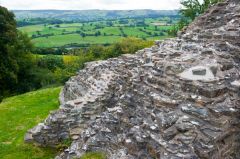 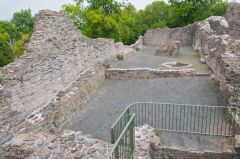 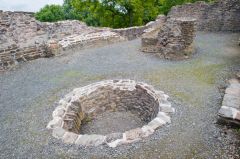 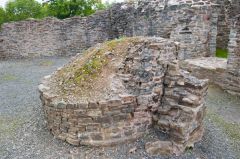 More self catering near Dolforwyn Castle >>