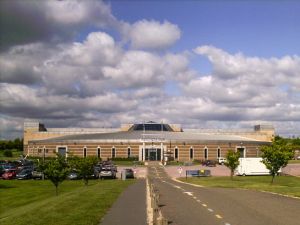 British Motor Museum
The British Motor Museum is not as well known (read less crowded) as the National Motor Museum at Beaulieu, but this fascinating museum houses the largest collection of historic British cars in the world. Enjoy a Land Rover shuttle ride, off-road 4-wheel drive circuit, and a recreation of a 1930's garage.
History
This important historical collection had its origins in the 1970s British Leyland began to organise its collection of historic vehicles. The museum expanded to include other vehicle makes and manufacturers, and in 1983 passed into the care of a new charity called the British Motor Industry Heritage Trust. A purpose-built museum was created at the old RAF Gaydon airfield in Gaydon, Warwickshire, near the Rover Group's design and technology headquarters.

The collection is now home to over 300 historic vehicles from all major British manufacturers plus a huge archive of over 2 million historic photographs, brochures, automative drawings, and records.

What to See
Because the size of the collection is so large, only some of the vehicles are on show at any one time. Among the models in the collection are the FAB1 made for the Thunderbirds film, Land Rover and Range Rover vehicles used by the Royal family, and the very first Land Rover ever made, dating from 1948.

See the Jaguar R1 used on the Formula 1 circuit in 2000, and the Ford Escort Mark 1 that raced in the London to Mexico World Cup Rally in 1970. Milestone vehicles include the 1 millionth Land Rover Discovery 4, the very first Mini, and the last Mini Cooper to roll off the assembly line (2000).

Most of the vehicles I've mentioned so far are fairly recent, but the museum collection goes back to almost the dawn of motoring. One of the oldest vehicles is a 1901 Albion dogcart, and the same company is represented by a 1909 Tourer.

Of even more interest to automotive enthusiasts will be the 1907 Austin 30hp, the oldest surviving Austin in the world, used as a bus in Birmingham, then as an ambulance during WWI. Even older is an 1898 Greens lawn mower! One of the earliest MGs ever made is on show; the 1925 'Old Number One'. See a 1913 Morris Oxford 'Bullnose', and a 1935 Morgan Supersports 3-wheeler. Another vintage vehicle is the 1899 Royal Riley tricycle, the oldest Riley in existence.

These are just some of the collection highlights. There are also regular motoring events, and the museum not only offers a research and registry service; using the VIN (Vehicle Identification Number) the museum can find all available information on a car, including original paint colour and available purchase options.

The Granary at Fawsley - 12.5 miles
Daventry, Northamptonshire
Stay from: £50.00