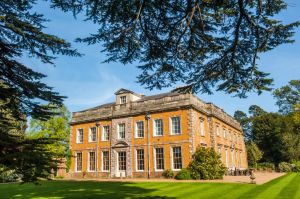 Farnborough was the home of the Holbech family for over three centuries. The Hall is a lovely Grade I listed late 17th-century country house built by William Holbech in 1684 and extensively remodelled between 1745-1750 by William Holbech the Younger.

The 18th-century design, likely executed by Sanderson Miller, is the golden-stoned house we can see today. The interior features exquisitely beautiful plasterwork ceilings by William Perritt, considered to be some of the finest historic plasterwork in England. Among the finest rooms in the house is ...

A magnificent example of elegant Rococo style, centred around a white marble chimneypiece. The room was created from the original exterior courtyard to the house by William Holbech the Younger around 1750, specifically to house a series of paintings by Canaletto. Holbech commissioned the artist to create views of Venice, and the ornate plasterwork design was made to showcase the paintings, along with two views of Rome by Panini.

The paintings on display now are copies of the originals, which had to be sold to pay death duties in 1929. The plasterwork in the Drawing Room is among the finest examples in England, an extravagant display of cascading flowers, classical urns, and mythical beasts.

The highlight for us was the Staircase dome, with incredibly ornate plasterwork depicting flowers and fruit, probably by Edward Goudge, who also worked at Chatsworth House and Belton House. The plasterwork originally adorned a flat ceiling, but the second William Holbech cut away the ceiling to create a dome and inserted three classical busts where the original 17th-century windows had been.

The oldest and most historically important bust is that of Emperor Lucius Verus (AD 161-169). This was the very first piece of Roman sculpture collected by the first William Holbech in the 1730s. On the right-hand wall is a bust of a Roman lady, possibly Lucilla, wife of Lucius Verus, and she faces another bust of an unknown woman dated to about AD 230.

The house is set in an extensive landscape garden which has remained essentially unaltered since it was established in the 1740s. There are enjoyable walks through the garden and surrounding parkland, augmented by glimpses of classical temples dotted around the garden. 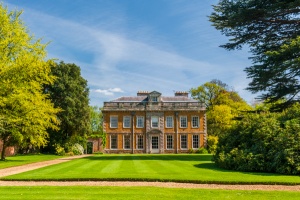 Rising from the house in a broad expanse of turf, the Terrace Walk was laid out by the second William Holbech sometime around 1740, with advice by Sanderson Miller, who helped design the neo-classical buildings which make the terrace so memorable.

The first 'folly' you reach on the Terrace is the wonderful situated little temple, set to give far-reaching views over the valley below. The Temple has four Ionic columns supporting a decorated pediment, with a small seating area at the rear of the space.

Close to the end of the Terrace is this Italianate temple, with an open loggia at the base rising to a 'prospect room' at first-floor level. This simple chamber is beautifully embellished with Rococo plasterwork panelling under a domed ceiling.

Punctuating the far end of the Terrace Walk like an exclamation point is The Obelisk, a slender Egyptianate column on a high plinth. The plinth is inscribed with the date 1751 but the Obelisk was described by visitors as early as 1746. The Obelisk collapsed in 1823 but was rebuilt. The base is carved with names of Italian prisoners of war, held here when Farnborough served as a military hospital during WWII.

Leading off the Terrace is a path that leads through a stone wall to a peculiar octagonal Game Larder, set on an exposed hillside with wonderful views over the 17th-century stew ponds to the spire of Farnborough church. Though the Game Larder had a practical purpose for storing game, it is designed in the style of a temple, with four Tuscan columns supporting a loggia.

Below the house, a path leads down the sloping hill to the lake. On the way, it passes 'Granny's Garden', a delightful Italianate rose garden and alcove, which replaced an earlier Georgian orangery. At the base of the path are a grotto and small cascade. When we visited there was a swan nesting at the tip of the lake, and the path let us approach quite close to the nest without disturbing the mother swan.

Farnborough is a delight; the house feels like a family home rather than a museum piece. The art and classical statuary are superb, and the dome over the staircase is an amazing piece of neoclassical art. The Terrace Walk is simply wonderful on a sunny afternoon; the sort of place you want to linger and drink in the views. 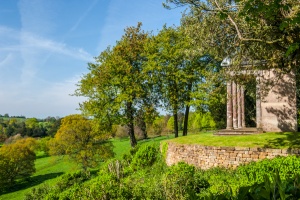 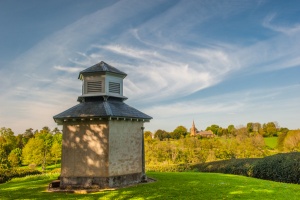 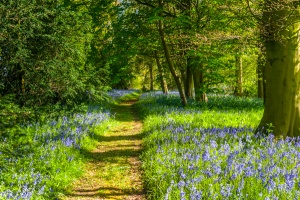 Bluebells on the Terrace 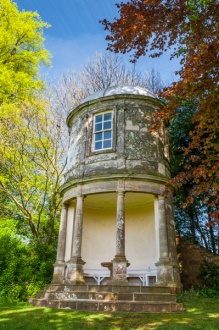 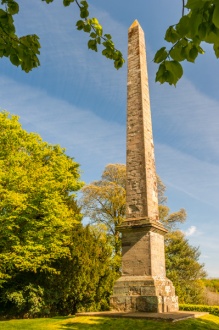 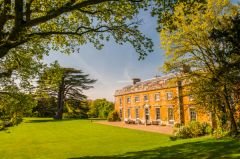 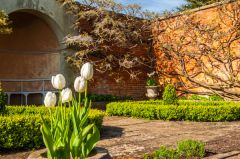 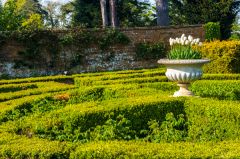 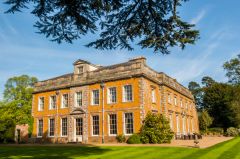 More self catering near Farnborough Hall >>

The Granary at Fawsley - 9.1 miles
Daventry, Northamptonshire
Stay from: £50.00