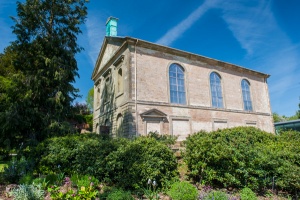 In 1768 the 14th Lord Willoughby de Broke called in Capability Brown to design a landscape garden for his mansion of Compton Verney. Brown's design called for the lake below the house to be widened, creating a broad, unbroken vista below the house.

There was only one problem with Brown's plan; the medieval family chapel was in the way. Brown demolished the chapel to make for his new garden layout, but thankfully he salvaged many of the family monuments from the medieval chapel. These monuments were incorporated in a new chapel behind the mansion house.

The chapel was begun in 1776 and finished in 1779. The centrepiece of the new chapel was the ornate alabaster table tomb of Richard and Margaret Verney, sculpted in 1631 by Nicholas Stone, one of the most popular and prolific funerary sculptors in the early 17th century. Stone is best known for his memorial to John Donne in St Paul's Cathedral, London.

In the late 18th century Stone enjoyed much greater fame than he does today, so it should come as no surprise that Brown decided to use his memorial to the Verneys as the showpiece of his new chapel. Indeed, he seems to have built the chapel around the tomb.

Behind the tomb and on either side of the altar plinth are more monuments to Verney family members. There are two large wall monuments by unknown sculptors, and numerous memorial brasses set in the floor. The collection of monuments alone is enough to justify the chapel's Grade I listing for historical importance. 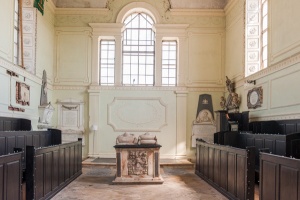 The oldest brass is to Anne Verney (d. 1523). Anne was the daughter of Richard Verney and married Edward Odyngsele of Long Itchington. Another brass shows a man in 16th-century armour with his wife and 14 children. The inscription is damaged so the family name is illegible, and the date is shown as 15...

There is a third brass to George Verney (d. 1574) and a slab to the infant son of Sir Greville Verney (d. 1620). These are just a few of the numerous Verney memorials, most of which are of a very high quality, though suffering from evidence of decay.

The building is in Italian Classical style, with walls of ashlar masonry and one door at the west end. Brown installed 16th century glass from the original chapel, but this was rather tragically sold off in the 20th century, so that much of the window glass is now clear. There is a west gallery supported on Doric columns, and a wonderfulcoffered ceiling decorated with rosette carvings and coving. The interior decoration is in the style of Robert Adam, with exquisitely detailed plasterwork panels.

The Compton Verney Chapel is of great historical significance, in part because it is among the very few examples of buildings designed entirely by Capability Brown to survive, and also because so few chapels were built during the Georgian period.

As a side note, if you wander down to the lakeshore, you will find a small obelisk which marks to location of the original medieval chapel. Scattered amid the trees by the lake are gravestones marking the site of the chapel's burial ground.

Compton Verney Chapel is in the process of being restored as this is written. Subsidence within the structure is obvious, and the Verney altar tomb lists at a noticeable angle.

The chapel is only accessible during opening times for Compton Verney House and Gallery, for which an admission is charged. It is well worth visiting the gallery inside the house, but do not miss the chapel! 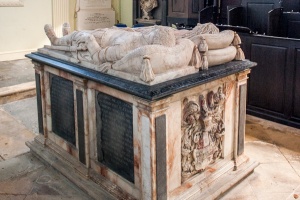 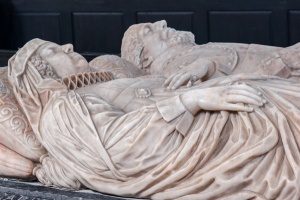 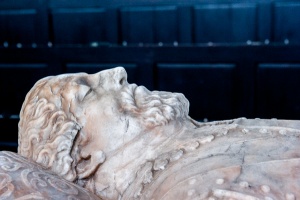 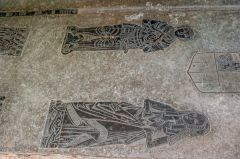 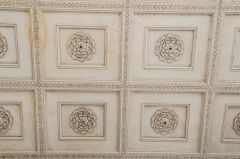 The Granary at Fawsley - 15.3 miles
Daventry, Northamptonshire
Stay from: £50.00