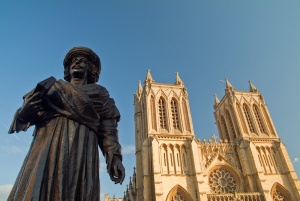 The largest city in south-west England, Bristol was once the second-largest city in England. Its location on the Bristol Channel made it a natural centre for seagoing activities, and the historic port was the starting point for many a voyage over the years.

Among the voyages was that made by John Cabot, who left from here in 1497 on his voyage to the New World. Cabot was an Italian who convinced rich Bristol merchants to finance his voyage of discovery in the hope that he would find the 'spice islands'. Cabot's ship, The Matthew, stands beside the river and can be visited today.

The most famous ship associated with Bristol is, however, the SS Great Britain. This huge vessel was the brainchild of Victorian engineer Isambard Kingdom Brunel, who broke new ground with his use of an iron hull, and his development of a screw propeller.

When it was launched in 1843 it was the largest vessel in the world. The SS Great Britain has been preserved in the drydock where it was made, and it is now one of Bristol's major tourist attractions. 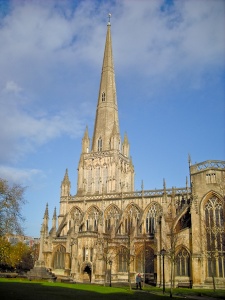 Bristol Cathedral is a superb medieval cathedral, one of the finest examples of Gothic architecture in Britain. The cathedral was begun around 1140 by Augustinian canons. It was later expanded in the 13th and 14th centuries.

Unusually for Britain, the cathedral is built in the 'hall' style (with the aisles and nave the same height), a style more common to the European continent. Of especial note is the lierne vaulting of the nave and aisles; this is one of the best examples in the world of this style of vaulting.

There are other historic churches to see in Bristol beyond the cathedral. St Mary Redcliffe is one of the best; it dates to the 12th century and has been called one of the finest Gothic churches in the country. On the subject of churches, Bristol is home to the oldest Methodist chapel in the world. The 'New Room' as built in 1739. There is also a Quaker meeting house dating to 1670.

A short walk from the Cathedral is the Georgian Town House. The house was the Bristol home of John Pinney, a native of the city who made his fortune running sugar plantations in the West Indies. Pinney returned to Bristol with enough money to build this elegant house. With him came Pero, a West Indian slave whose name lives on in Pero's Bridge at the harbourside.

The museum shows what life was like for a prosperous Georgian merchant, and has displays relating to family life in the 18th century, as well as information about slavery, and Pinney's unintentional connections to the growth of the anti-slavery movement. 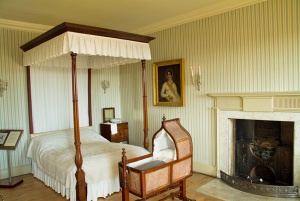 The city of Bristol is blessed with several fascinating museums. Among the best is the City Museum and Art Gallery on Queen Street. This excellent museum covers subjects as diverse as dinosaurs, ancient Egypt, British flora and fauna, fine art, and geology. The museum provides plenty of child-friendly activities as well, to keep younger visitors interested.

Children will also love Bristol Zoo, one of the largest zoological parks in the UK. (Please note that after 186 years, the Bristol Zoo will close on 3rd September 2022. There are plans for it to re-open in a new location.)

Just to the west of the city centre is the Clifton Suspension Bridge. This bridge, designed by Brunel, was one of the engineering marvels of its day. The bridge spans the Avon River, with a total distance of 1,352 feet.

Incredibly, though it was designed for early Victorian horse and cart traffic, it still stands up to the demands of modern-day vehicular traffic. The bridge was begun in 1831, but due to financing problems, it was not finished until 1864, well after Brunel's death.

Bristol is well situated for exploring northern Somerset, with the historic city of Bath only a short drive away, and good motorway connections to the south-west.

More self catering near Bristol

More bed and breakfasts near Bristol