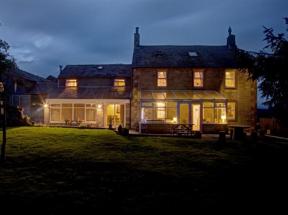 Set in wonderful open country on the Cumbria / Northumberland boundary with views to the North and East. Bush Nook Guest House was built in 1760 with stone probably 'borrowed' from the nearby Hadrian's Wall and is close to some of it best-preserved sections. Bush Nook offers comfortable 'home from home' en suite bed and breakfast accommodation and a superbly equipped self-catering holiday cottage.

Dating back to 1760 with further additions in 1811 and 1849 Bush Nook was a working farm until the 1950's. Providing quality accommodation in a traditional farmhouse setting with an accredited Visit Britain 4 Star rating. We can provide home cooked evening meals for groups of 6 to 12 with predominantly local ingredients and produce which includes local lamb beef and dairy products along with a drinks menu providing a wide range of wines spirits and soft drinks.

Dinners should be booked in advance with prior notice of any special dietary needs. In recent years Bush Nook has appeared on several TV programmes including Britain's Best Breaks The Wall as well as on BBC Radio 4's food show and has been featured in Cumbria Life magazine and the travel sections of many national newspapers. All rooms are ensuite many having open-beamed ceilings with digital TV and radio WiFi is available in the main House.

There is also the superbly equipped self-catering cottage in the Hay Barn sleeping two to four people which can also be made available as a luxury 'suite' on a B & B basis. Guests can relax in the Nook Bar or the delightful conservatory or soak in the Garden Hot Tub. Overlooking Birdoswald Roman Fort and close to the 'centre' and best-preserved sections of the Heart of Hadrian's Wall Bush Nook is situated right on the Cumbria/Northumberland boundary halfway between the towns of Haltwhistle and Brampton and is only half a mile off the A69.

The fascinating Roman archaelogical centre of Vindolanda and Roman Army Museum are within easy reach along the Military Road Housesteads Corbridge and Chesters also an easy drive. Ideally situated to explore the area which is a hidden treasure of England with beautiful scenery and the largely unexplored area of the English borders the Northumberland National Park the North Pennines and the Eden Valley. We are easily accessible to Carlisle and the M6 to the West and Newcastle and the A1 to the Eas

Dining Facilities
With a dining room for up to 22 we maintain a food policy of "good food-well cooked"and aim to use local produce whenever possible. Dinner is served at 7pm but is NOT served every day so please check for availability

Get an Ordnance Survey map covering the Gilsland area.

String of Horses
Inn (9.5 miles away)