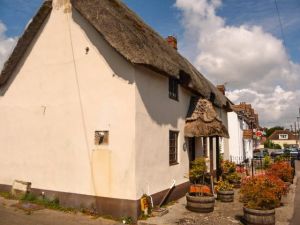 Wool is a sizable village on the River Frome, in the Purbeck area of south Dorset. Beside the river is Woolbridge House, a 17th-century manor that was the 'Wellbridge House' of Thomas Hardy's 'Tess of the D'Urbervilles'. In the novel, Tess and Angel Clare spent their honeymoon here before Tess revealed her shameful past and Angel deserted her

The real Woolbridge House has a far happier history. The manor was owned by the descendants of Sir Payne de Turberville from the Norman Conquest until 1733 when they sold the property to the Drax family of Charborough Park.

By that time the Turbervilles had built the current house, which bears a datestone of 1635. The added a southwest wing on 1660, but apart from that addition, the manor is perfectly preserved in its original 1635 state.

An old tradition, mentioned in Tess, says that a ghostly coach crosses the bridge at night, but only Turberville family members can see it. There are several different versions of the tale, but one suggests that the coach relates to very real local events in the 16th century when John Turberville eloped with the daughter of the 1st Viscount Howard of Bindon.

Another, less spectral tradition says that a secret tunnel runs from the manor, passing under the river to the site of Bindon Abbey. It must be a long tunnel, for the abbey ruins are roughly half a mile east of the village. The abbey was established in 1149 as a daughter house of Forde Abbey. It was dissolved by Henry VIII in 1539 and eventually passed to Thomas Howard, who built a country house on the abbey ruins.

The house was destroyed in the Civil war, and stone was used to build nearby Lulworth Castle. You can still see remains of the garden, including a wide moat. Amongst the ruins is the open stone coffin of Abbot Richard de Maners. In Hardy's novel, the sleepwalking Angel Clare carried Tess to the abbey and placed her in the empty coffin.

The 15th-century bridge provides a wonderful vantage point to view the manor house. The bridge leads to a lovely old 13th-century church, dedicated to the Holy Trinity. We don't know precisely when the church was begun, but the earliest stonework appears to be from around 1320.

The most intriguing feature of the church is its unusual trisected chancel arch. There is a 15th-century font, a royal coat of arms from the reign of George III, and an ancient flute used to perform church music before the organ was installed.

Another interesting old building is the Old Bake House on Spring Street. The Bake House dates to the 18th century and features unusual sash windows on the ground floor which slide sideways rather than the usual up and down.

The partial ruins of medieval Bindon Abbey lie to the east of the village, and the Tank Museum at Bovington is two miles distant. Monkey World Ape Rescue Centre is just a short distance outside the village. 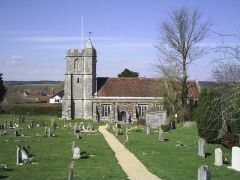 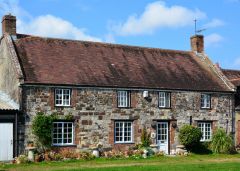 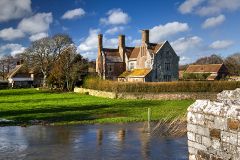 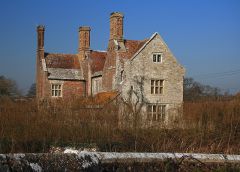 More self catering near Wool >>

More bed and breakfasts near Wool >> 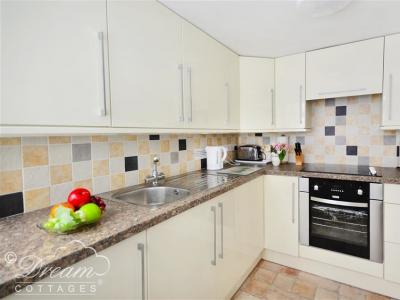 This cosy terraced cottage on the outskirts of Moreton village in Dorset this property can sleep four people in two bedrooms.
Sleeps 4 This self-contained ground-floor annex is in the village of Wool near to Wareham in Dorset and can sleep 2 people in 1 bedroom.
Sleeps 2