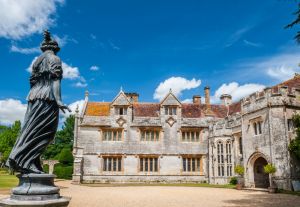 This is what an English manor house should be! Sir William Martyn built the manor house at Athelhampton about the year 1485. The original house consisted of a great hall, solar, and buttery. This basic structure was extended by Robert Martyn in the early 16th century to include a west wing and gatehouse. The early Martyns are buried in the Athelhampton Chapel in the parish church of Puddletown.

At the core of the house is the Great Hall, which has been called one of the finest examples of 15th-century domestic architecture in England. It is a description that I would heartily endorse. The chamber is supported by a largely original 15th-century roof and boasts a carved Minstrel's Gallery screen at one end, and linenfold panelling of unusual height. Among the artwork on display is a 16th-century Flemish painting of the Adoration of the Magi, painted with oil on wood.

Below the original 15th-century solar is a wine cellar, reached by a secret door from the hall. A persistent legend says that a tunnel leads from the cellar into the nearby woods, but this tunnel has never been found. Another highlight is the panelled Great Chamber, with Elizabethan carved panels and a lovely plasterwork ceiling.

Other notable rooms include the King's Room, where the Manorial Court was once held, and a suite of state bedrooms filled with period furnishings and artwork. 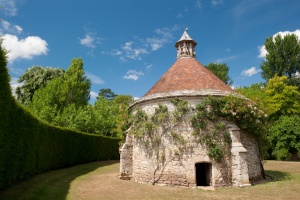 Elizabethan spiral stairs lead to a set of rooms at the top of the house, now given over to a gallery showcasing the art of Morevna, a cubist painter who resided at Athelhamton in the mid-20th century.

Athelhampton is set in quite glorious gardens. The most prominent of these is the Great Court, with tall pyramidal topiary surrounding a central fountain. Perhaps the most interesting feature in the gardens is the Corona, an intimate circular area surrounded by clipped yew trees.

There is also a Lime Walk, a lovely canal, and a White Garden. An informal walk leads across the River Piddle to a boardwalk along the riverbank. Also in the grounds is an 18th-century circular dovecote with space for 1500 birds. In the far corner of the garden is an old Tolbooth, where you can read a list of charges levied on people using the Athelhampton turnpike road.

Author Thomas Hardy's father worked on the house as a stonemason, and Thomas visited on several occasions. He used the house as the setting for his poem, The Dame of Athelhall.

Across the road from the manor house is Athelhampton church, built in 1862 by George Wood. Wood must have been an optimist, as the church was built to seat 72 people, double the size of Athelhampton village at that time. The Martyns of Athelhampton were buried at Puddletown church a few miles away, and the tombs are well worth stopping in to see.

Athelhampton is a quite wonderful historic house, an absolute must-see.

More self catering near Athelhampton House >>