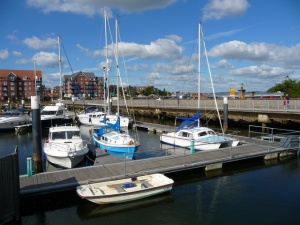 Weymouth's heritage as a seaport and fishing centre is overshadowed by its 18th-century renaissance as a watering-place and its more recent revival as a popular seaside resort. Most of the finest buildings are remnants of the town's glory days as a Georgian resort, but there are even earlier houses to be found, including the converted Tudor cottages on Trinity Street.

George III lived in Weymouth, at Gloucester House (now a hotel). Reminders of the monarch are not hard to find; his likeness is cut into the turf of a hill outside the town, and a large statue stands on the busy seafront near the Tourist Information Centre.

The seafront is the hub of activity in Weymouth, a stretch of golden sand bestrewn with deckchairs and crowded with sun-seekers in summer. More relaxing perhaps are the opportunities for fishing and boating in the area.

Weymouth is located between two Heritage Coasts (Purbeck and West Dorset Heritage Coast), and inland from the sea the entire surrounding region has been designated an Area of Outstanding Natural Beauty.

The town is just north-east of the Isle of Portland, a wonderfully isolated coastal area tenuously joined to the mainland by the narrow sweep of Chesil Beach.

Portland is an excellent bird-watching territory, with Pulpit Rock a good spot to observe puffins during the early summer. On the north-east coast of the Isle is Portland Castle, one of the best-preserved of Henry VIII's coastal defences.

A more modern defensive structure is Nothe Fort, built on a headland jutting into Portland Harbour in 1860. It was in service until 1956 and has since been transformed into a living museum, tracing the history of the fort, and in particular the role of Weymouth in the Second World War.

More self catering near Weymouth

More bed and breakfasts near Weymouth

Self Catering near Weymouth