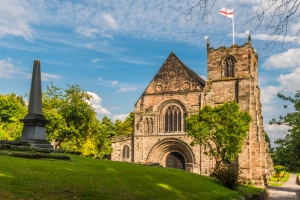 Tutbury's impressive Priory church is all that remains of an 11th-century monastery founded by the lord of Tutbury Castle. The church is well worth visiting for its magnificent west front and beautifully carved Norman doorway.

In 1089 Henry de Ferrers, lord of Tutbury Castle, built a church below his hilltop fortress, and dedicated it to William the Conqueror, who had just died, and his wife Matilda, as well as Ferrers own family.

The new Norman church was built on or near the site of an earlier Saxon building of which little is known. Some 60 years later his descendent, Robert de Ferrers, founded a Benedictine priory here, with monks drawn from the Norman abbey of St Pierre sur Dives.

Another version of the church's founding says that it was Henry who founded the Priory at the same time as the church, and makes no mention of Robert.

Henry IV spent much of his childhood at Tutbury and would have known the church, and probably worshipped here. From its foundation, the church served both the Priory and the town, a fact which would save it from destruction at the Reformation.

The Priory was dissolved by Henry VIII in 1538 and its estates were given to Sir William Cavendish. The monastic buildings were pulled down, the central tower of the church destroyed, along with the transepts and two bays of the nave. 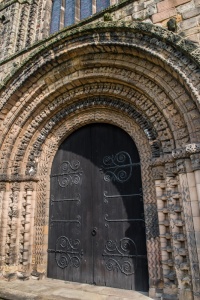 The westernmost 6 bays of the original nave were preserved as the new parish church. The monks were give a pension, and the last Prior became the first vicar of the new church. So the building we see today is about one-third the size of the original building.

What remains is a tantalising mix of time periods and styles. By far the most impressive feature is the ornate west facade, with its wide-arched doorway carved with traditional Norman motifs. It is one of the finest and most beautifully carved Norman facades in England.

The magnificent doorway stands over 14 feet high and is set deep within a series of 6 moulded arches. The second arch is made of local alabaster and installed around 1160. It is one of the earliest examples of English alabaster carving. High to the right of the west door is the mark of a cannon-ball, presumably fired at the castle.

The west front may date to around 1150, though the nave itself is earlier, perhaps from around 1100. If you look closely you can see masons marks left on the nave pillars by Norman stoneworkers. The south aisle was damaged during a rebellion by Robert de Ferrieres in 1266 but retains some Norman stonework. 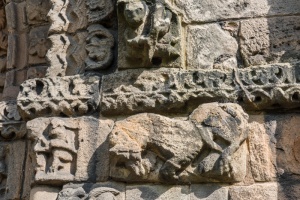 Though the west doorway will deservedly get most of your attention, the south doorway, by which you enter the church, is worth a closer look. The doorway arches are Norman, but the lintel over the door is thought to be Saxon, probably from the first church on this site. It shows a boar hunting scene.

The east end of the south aisle was rebuilt in 1307 by Edmund, Earl of Leicester.

Set onto a pillar behind the pulpit is a 13th century carved head of Christ. This carving may have been part of the original reredos behind the high altar of the monastic church. In the north aisle is a medieval alabaster coffin, discovered when a grave was being dug in 1972.

The coffin contained the remains of a woman, aged 36-40, perhaps a benefactress of the Priory, though we do not know for certain who she was. Aside from this medieval coffin the only real memorial of note is to a former Puritan vicar named Anthony Orridge, who died in 1655.

At the west end of the nave is a 16th-century parish chest, and the lectern is carved from a 6,000-year-old piece of black bog oak found in the River Dove.

Tutbury's Priory church is well worth a visit; the sheer scale of the Norman architecture is impressive, and it is fascinating to think that what we see now is just a small portion of the original Norman monastic building. 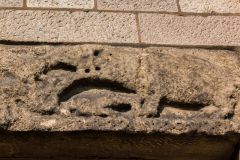 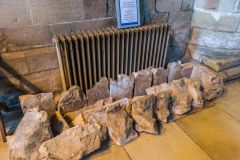 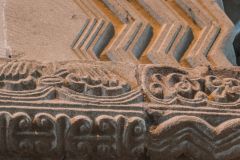 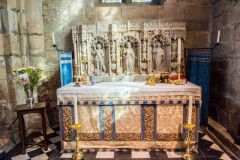