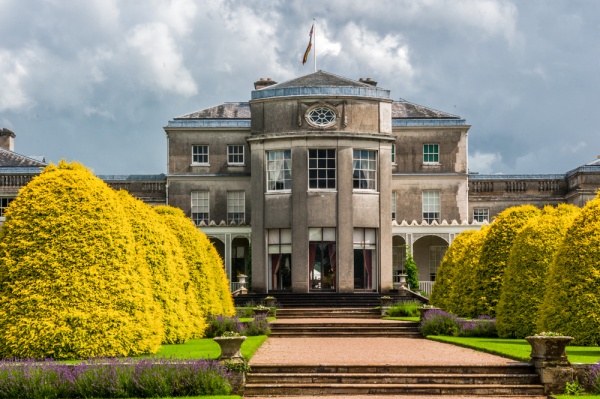 Shugborough Hall is an elegant country house built in 1695 on the remains of a moated medieval bishop's palace and an early 17th-century house. The house was remodelled in 1760 and again in the late 18th century. It is the current home of the Earls of Lichfield. 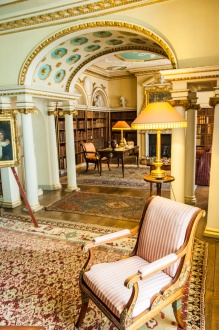 The original Bishop's Palace belonged to the Bishops of Lichfield and dated to the 14th century. In 1624 a successful lawyer named William Anson bought the estate for £1000, a huge sum for the times. Anson adapted the palace ruins to create a new manor house in keeping with his wealth.

In 1693 Anson's grandson, also named William, tore down the manor house to make way for a modest three-storey country house. That late 17th-century building forms the core of the house we see today. The 17th-century building was enlarged from 1745 to create an impressive Georgian mansion by architect Thomas Wright. Wright added a pair of neo-classical pavilions flanking the central block of the house.

Thomas Anson, great-grandson of the first William, developed a taste for classical art during his grand tour of Europe. He indulged his taste for Roman and Greek style in the house interiors, adding elaborate plasterwork in rococo style, and collecting fine furniture and artwork.

Thomas Anson could afford to indulge his taste for art due to the success of his brother, Admiral George Anson (b. 1697). George Anson began his naval career at the age of just 14 but rose to become First Lord of the Admiralty. In 1740 he embarked on a circumnavigation of the globe aboard the Centurion, a voyage lasting 4 years.

During his momentous voyage, Anson captured a Spanish treasure ship laden with £400,000, one of the largest treasures ever seized by an English sea captain. Some of Admiral Anson's treasure was used to extend the Shugborough estates. He also brought back a huge collection of mementoes from across the globe, many of which are on display to Shugborough visitors. When Admiral Anson died heirless his brother Thomas inherited the estate and had the means to indulge his taste for classical art and architecture.

Thomas Anson was a founder of the Dilettanti Society, established to promote classical Greek art. He hired his friend James Stuart to build classical monuments in the grounds of Shugborough, such as the Doric Temple, Temple of the Winds, Dark Lantern, Shepherd's Monument, Chinese House, and Hadrian's Arch.

The park was redesigned by John Webb over the years 1795-1805 and was later augmented by a formal garden by Wiliam Nesfield in 1855. In addition, there is a recently restored walled garden.

If Admiral Anson was responsible for creating the fortune that made Shugborough what it is today, then his descendant the 1st Earl of Lichfield was responsible for losing most of it. The Earl lived a profligate lifestyle, gambled to excess, and entertained on a lavish scale.

The family fortune leaked through his fingers and in 1842 the entire contents of the mansion had to be sold at auction. The 2nd and 3rd Earls began the process of refilling the family coffers, but it was the 4th Earl who finally opened the doors of Shugborough to the public. After his death, the entire estate was offered to the National Trust, who leased it to Staffordshire County Council, and it is the council who run the house and the wider estate to this day.

Among the many estate buildings open to visitors include the servant's quarters and a model farm, with its own dairy, watermill, and kitchens. Rare breeds of livestock inhabit the park. Guides in full period costume work in the outbuildings, making cheese, butter, ale, and flour. See traditional working methods and tools at use, and enjoy the results of work by sampling local cheese, cooking, or even ale. 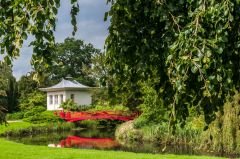 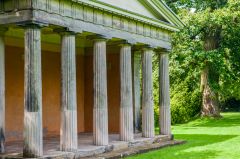 More self catering near Shugborough >>

More bed and breakfasts near Shugborough >>