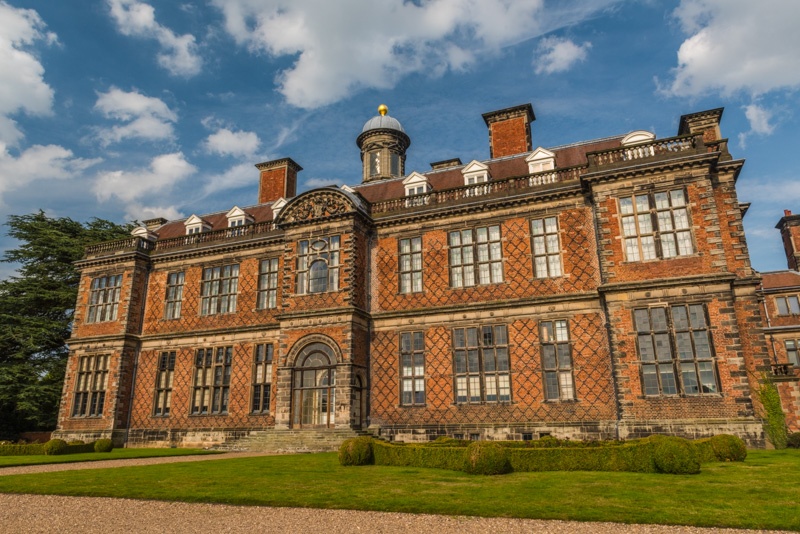 Sudbury Hall is an E-shaped Restoration mansion housing brilliantly crafted interior decoration. The house was begun by George Vernon around 1660, with contributions by Grinling Gibbons. Vernon financed his new home after an advantageous marriage the year before.

It seems likely that the eccentric Vernon acted as his own architect; certainly, the exterior is a peculiar mix of styles, ranging from diapered red-brick to a fanciful cupola, and entered through a two-storey porch. 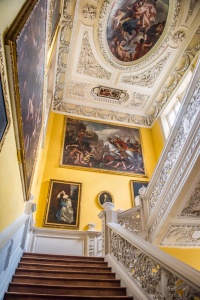 Sudbury Hall was built in a style that would have been thought old-fashioned at the time and included a row of oval windows in the upper storey that have been likened to spectacles, as if the house wore multiple pairs of eyeglasses. The most striking feature, however, is a small dome high over the entrance portico, crowned with a golden ball. Aside from being a striking decorative feature, the dome was used as a beacon for travellers.

At the same time as he was building the Hall, George Vernon rebuilt the estate village, which has remained remarkably unchanged since. He even built a village pub, The Vernon Arms, which is still a pub today.

The simple, even understated exterior belies the impressive and luxurious interiors. The interior has been well-preserved, though in places the furnishings are sparse. The most impressive feature of the house is the great staircase, where wonderful plasterwork and allegorical paintings by Louis Laguerre line the broad stairwell.

The long gallery sports more superb plasterwork, with likenesses of Roman emperors sharing space with exotic animals and foliage designs. The gallery stretches 167 feet and is lined by family portraits. Long galleries were common in Elizabethan houses, where they provided a place to exercise on wet days, but it is unusual to find one in a Jacobean house.

One peculiar chamber is the Billiard Room, which seems at first glance to be in a dreadful state of disrepair, but actually it is preserved exactly as the Vernon family left it. One theory, that a friendly volunteer steward suggested to us, is that the family simply ran out of money and could not complete the Billiard Room.

We mentioned Grinling Gibbons earlier; nowhere is his craftsmanship more evident than the superb carving that surrounds the fireplace and mirror overmantle in the drawing room. Look closely and you will see that what appears at first to be a design mirrored on both sides is actually different, with unique clusters of foliage, fruit, and animals. The carving was created in 1678, at a cost of 40 pounds. The detail is extraordinary and underlies why Gibbons was so highly respected and sought after by the wealthiest house owners in Britain. 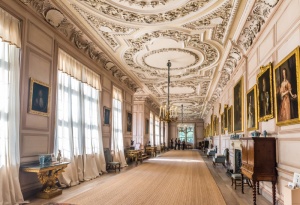 Perhaps the finest room in the house is the Great Staircase, built for show, probably to a design by George Vernon himself. If Vernon did design the delicate traceried stair and the ornate plasterwork ceiling, he was an artist of no mean skill, for it is one of the finest staircases chambers in any British country house.

As you wander through the ornate state chambers the rooms might look a little familiar. That's because the Hall was used for interior settings in the 1996 BBC production of Pride and Prejudice.The Hall stood in for Pemberly in the film, with scenes set in the Long Gallery, Saloon, Great Staircase, and other rooms throughout the house.

The state rooms are luxurious and opulent in the extreme, but when you pass beyond them to the family rooms and bedchambers you get a completely different picture of the Vernon family's home life, for here the rooms are simple, pleasant, and intimate, with none of the sumptuous decoration of the state rooms. You really do get a glimpse into the family's private life.

The parkland surrounding the Hall includes a formal garden laid out at the Restoration, and later 18th-century landscape gardens designed by Capability Brown. A more recent addition is a Victorian formal garden. Beside the Hall is the medieval church of All Saints, with tombs of the Vernons dating back centuries. One of the highlights is an alabaster memorial to John Vernon and his wife Mary (c. 1600).

Sudbury Hall is without doubt one of the finest and best-preserved Jacobean houses in England.

Contained within the service wing of the house is the: 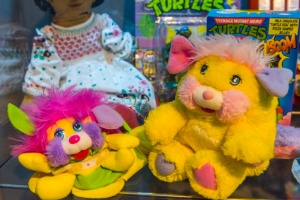 Though the major focus of the museum is on the 'bright and cheerful' aspects of childhood, with toys, games, and pastimes covering hundreds of years, the collections do explore the lives of children in different eras. There's very little bright and cheerful in the story of how 18th-century children worked in cotton mills or the lives of a Victorian chimney sweep, and it is sobering to think how our views of what it means to be a child have changed.

That said, exploring the museum will be a trip down memory lane for many adults, and place to enjoy historic toys and games for many children. Thankfully, the museum is not just looking at nostalgic objects in glass display cases; there are several play areas, where you can enjoy playing with replica historic toys. This is a great museum to enjoy as a family; our kids were constantly asking us if we had a particular toy or game when we were children.

Note that you can visit the museum by itself, or the house by itself, or both, and National Trust members will be admitted free to both attractions.

After you've explored the house and museum don't miss the opportunity to visit the medieval church, sheltered in a copse of trees to one side of the house. The highlight here is a collection of Vernon memorials, including that of Sir John Vernon and his wife Mary. Also, look for a memorial window to the evacuee children of London who sheltered at Sudbury Hall during World War Two. 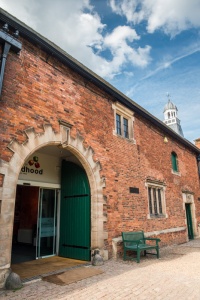 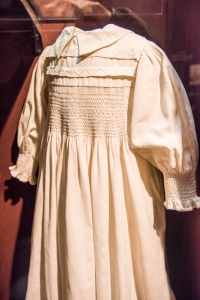 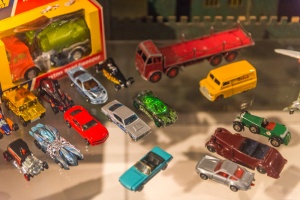 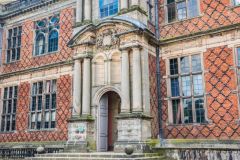 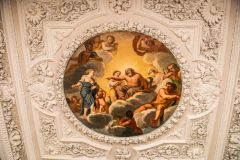 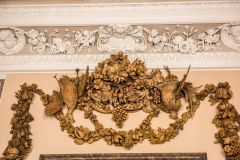 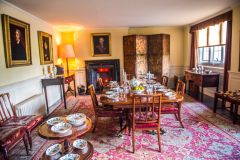 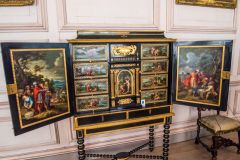 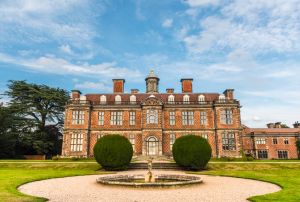 More self catering near Sudbury Hall