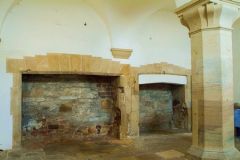 English Heritage, the government body charged with preserving historic sites and buildings, is not known for sensational press releases. I would imagine that archaeological reports are only sensational to other archaeologists! But English Heritage has released the first detailed survey of ghosts and hauntings reported at its properties.

It is easy to dismiss one or two reported hauntings as confusion or the result of an overactive imagination, but the English Heritage survey is pretty serious stuff! At many sites, visitors report being pinched or pushed when there is no one around. Staff members and visitors report figures that appear and then disappear, and staff frequently report items in locked rooms that are moved around.

Some of the places reporting more than their fair share of ghostly incidents include Dover Castle, where incidents of ghostly figures crop up almost every month.

Visitors reported being pinched, barged into, or even slapped, when no one was present, at Scarborough Castle (Yorkshire) and Portland Castle (Dorset). At Battle Abbey visitors report seeing figures dressed in monk's robes, while at Portchester Castle (Hampshire) a member of staff saw a riderless horse appear, then disappear through a wall.

Pay close attention to your tour guide if you visit Eltham Palace, near London; one group tour was guided around the property by an unknown guide answering the description of a staff member who had died a week earlier!

The site with the highest reported incidents of unexplained phenomena seems to be Bolsover Castle in Derbyshire. Visitors have reported being shoved or pushed, items in locked rooms have been moved, and unexplained figures have appeared. These figures are by no means frightening; the most common is that of a young child, who holds the hand of visiting children.

I must add my voice to those reporting incidents at Bolsover; in my case, I did not see figures. Rather, on entering one particular chamber I had the very strong feeling of walking into a room where someone else was present, yet my eyes clearly told me that the chamber was empty. It was not frightening, just rather unnerving. A ghost? Hauntings? Too much sugar in my coffee? Who knows, but that's half the deliciously scary fun!

More:
English Heritage reveals most haunted sites - story from the Telegraph
Castles with Ghosts - from Castles-in-Britain.com