HERITAGE HIGHLIGHTS:   The most complete Roman fort in northern Europe 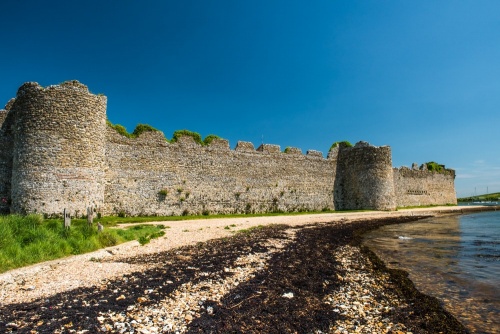 There is a little bit of everything at Portchester Castle; the 9-acre site contains the most complete set of Roman walls in northern Europe and also houses a Saxon fortress and a medieval royal palace.

The original fortifications may have been built by Carausias, who rebelled against Roman rule in the year 285. If so, it seems ironic that the fort was quickly taken over by the Romans themselves and served as one of the major 'Saxon Shore' forts, defending the British coast against attack by Germanic pirates. 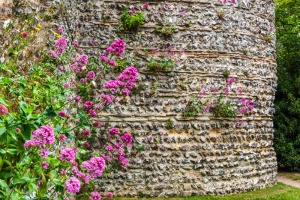 Roman walls of the fort

The fort is remarkably complete, with walls enclosing a square area some 9 acres in size. Portchester is the best-preserved Roman fort north of the Alps. The wall still stands to its full height and is reinforced with U-shaped bastions projecting outwards. There were originally 20 of these bastions, but only 14 survive due to later alterations to the wall defences.

In the 5th century, after the departure of the Romans, Portchester was used by the Saxons to protect against Viking raiders, and a burh, or planned fortified town, grew up here in the 10th century. Excavations have uncovered a later 10th-century hall and tower, perhaps the residence of a thegn.

Even after the passage of 6 centuries the walls must have still presented a forbidding barrier, for shortly after the Norman Conquest William the Conqueror granted it to William Maudit, who built a timber palisade and earthwork defences inside the Roman walls.

Sometime around 1130 the Norman lord William Pont de l’Arche reinforced the walls and established a stone fortification inside the Roman site. He added a stone keep and laid out an inner bailey with secondary buildings to support a garrison. Around the same time, he established an Augustinian priory inside the Roman enclosure, though the priory later moved to Southwick.

The first written record of the castle comes in 1153 when Prince Henry (later Henry II) granted it to Henry Maudit. The royal gift did not last long, however, for when Henry ascended the throne in 1154 he took Portchester back. Throughout the medieval period, Portchester was a royal stronghold and served as a good place for monarchs travelling to and from France. Henry II used it regularly and kept important prisoners here. 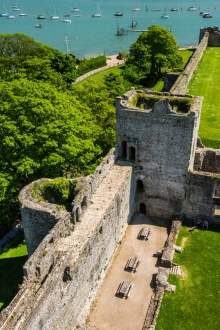 The parapet walk from
the Great Tower

King John came often, and expanded the royal apartments. Edward II rebuilt much of the defences in the 1320s when threat of a French invasion loomed. The last major rebuilding was by Richard II in the last years of the 14th century. Richard built a lavish suite of royal apartments, rebuilt the great tower, and the Landgate entrance.

High drama came to Portchester in 1415. Henry V used the castle as his base to prepare for an invasion of France; an invasion that culminated in the victory at Agincourt. While he was staying in the castle a plot to depose him came to light. The conspirators were seized, tried, and executed within the castle.

By the early 17th century the castle had fallen into disuse. In 1632 Charles I sold it to Sir William Uvedale, whose descendants still own the site. The castle was used as a prison during the 1665 Second Dutch War and used periodically as a prison throughout the 18th century. The defences were rebuilt during the Napoleonic Wars, with quarters for holding up to 7500 prisoners of war. The last prisoners left in 1814 and the army withdrew in 1819. Since then Portchester Castle has been in state care.

The castle presents an extraordinary glimpse into English history, from Roman to Saxon, medieval kings to prisoners of war. The Roman and medieval features are remarkably well-preserved and really give a sense of how Portchester must have looked at different points in its long history. 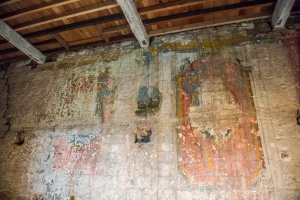 The castle is very well signposted from nearby roads, and access is simple. There is a free car park immediately opposite the castle. You can freely enter the huge area bounded by the Roman walls, but to enter the medieval castle there is a fee (free for English Heritage members).

Take some time to explore the outer walls of the fort, where you can easily make out Roman bricks in the walls.

The castle stands in the north-west corner of the fort, and though it is large it seems almost lost within the huge outer walls of the fort. The castle is defended by a ditch and curtain wall laid out on an L-plan. Around the exterior of the outer bailey are medieval ranges. The impressive Ashton's Tower was built between 1376-1381 by a castle constable named Ashton, and the imposing south range was remodelled in the early 17th century by the last constable of Portchester Castle, Sir Thomas Cornwallis.

The south and west of the inner bailey are occupied by the remains of a royal palace built by Richard III from 1396-1399. In the south range were the royal kitchens, extravagant porch, and the great hall, where business was enacted and entertaining took place. The west range was used for royal apartments, with a Great Chamber for the king himself.

The most impressive feature of all is the Great Tower, standing 30 metres high (almost 100 feet). The tower was begun in the early 12th century, with a second stage added in the mid-12th century and the top level added in the 1320s. 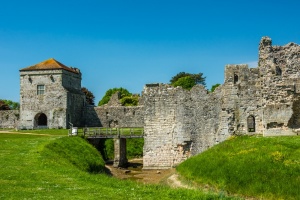 The moated entrance and gatehouse

The views from atop the castle tower are simply stunning. You can look down on the royal apartments below, and the walls of the Roman fort that encircle the site.

The Great Tower was converted for use as a prison during the Napoleonic Wars. Thousands of prisoners were kept in the tower, and extra floors had to be inserted in order to provide enough space. One wonderful remnant of the castle's days as a prison is a series of paintings left by the French prisoners on the second-floor wall. The prisoners used this area to give theatre performances to keep themselves active. You can see an elaborate painting of scenery which includes a view of the castle itself. You can also see graffiti left by the prisoners in several places.

Don't miss the beautiful historic church of St Mary in the south-east corner of the fort. It is the only building remaining from a priory for Austin canons founded here around AD 1128 by Henry I. The priory later moved to Southwick, further inland, where you can still see some of the 12th-century monastic buildings. 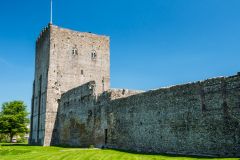 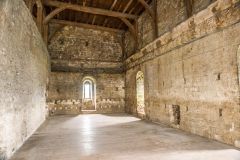 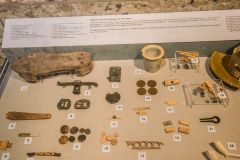 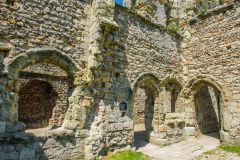 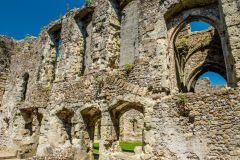 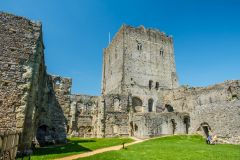 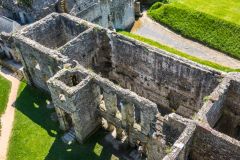 More self catering near Portchester Castle >>