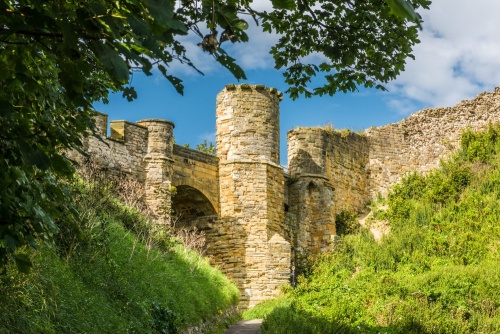 Scarborough Castle is a medieval ruined fortress atop high cliffs looking over the North Sea. The site was alternately fortified by Romans, Saxons, and Vikings before Henry II built the castle you can see today.

It is tempting to think of Scarborough Castle as a medieval fortress, but in fact, Henry II's castle is just the most recent in a long line of fortifications on a rocky headland above Scarborough, defended by 300-foot-high cliffs. The headland has been fortified since at least the Iron Age, and has had a human presence for over 3000 years.

Finds of pottery suggest that the headland was occupied as early as 2100 BC, but it seems that the first permanent settlement came around 800 BC.

The first defensive structure we know of was a timber tower erected in the late 4th century AD by the Romans, one of a series of signal towers along the coastline of north-eastern England. You can see remains of the signal station walls within the later medieval castle walls.

We do not know if the Vikings made a permanent settlement at Scarborough, but the Anglo-Saxons certainly did, for remains of a chapel have been found within the earlier Roman signal station. The chapel was built around 1000 AD, with a small cemetery nearby. 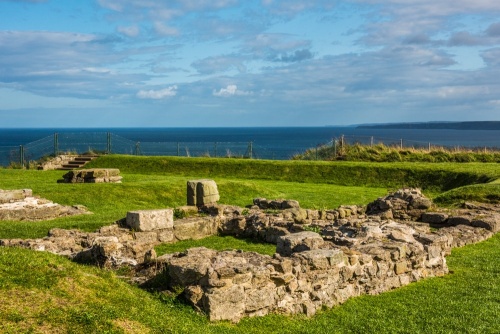 Ruins of the Roman signal station and medieval chapel

In 1138 William le Gros was named Earl of York by King Stephen, and given the royal manor at Scarborough. Earl William began work on a new stone fortification around that time, and a civilian settlement, or borough, grew up around the castle. That settlement in time became the town of Scarborough. Earl William built a wall across the headland, defended by a tower gatehouse.

We will never know what other plans the Earl had for Scarborough, for when Henry II came to the throne he demanded the return of all royal castles, including Scarborough. In 1159 Henry started an ambitious project to rebuild Scarborough Castle, and laid out a new town at the same time. His major addition to the castle was a huge great tower, the ruins of which are the most impressive part of the castle interior today.

King John lavished more money on Scarborough and made it one of 2 royal castles to exercise control over Yorkshire - the other being Knaresborough. King John spent over 200 pounds on Scarborough, more than any other castle in England during his reign. He had a wall built around the inner bailey, erected a royal residence, and built halls in both the inner and outer baileys.

Edward I held Scottish prisoners here, and Edward II's favourite, Piers Gaveston, stayed here briefly in his struggle with Edward's barons. Though the castle remained a royal fortress, the powerful Percy family were given permission to live here, and they added amenities like a brewhouse, bakehouse, and new kitchen to the inner bailey. 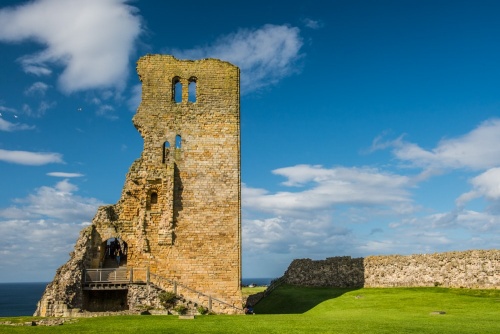 The castle was held by a succession of constables on behalf of the crown. One constable, Sir Ralph Eure, defended Scarborough against rebels during the Pilgrimage of Grace in 1536. Another rebellion followed in 1557 when Thomas Stafford captured the castle and held it on behalf of Mary, Queen of Scots. Stafford anticipated a popular uprising on Mary's behalf, but he had misgauged the nation's mood, and no uprising ensued. He was forced to surrender, and he and his followers were executed.

Things got rather complicated during the Civil War. Sir Hugh Cholmley held the castle for Parliament, but then changed sides to support King Charles. While he was away at Oxford consulting with the King, Cholmley's cousin Captain Browne Bushell, made a surprise night attack and captured the castle for Parliament. Cholmley hurried back to Scarborough, and managed to persuade Bushell to surrender the castle to him. He held Scarborough as a Royalist base for 2 years, until 1645, when Parliament launched a massive offensive to recapture the castle.

In a bloody and bitter siege lasting almost 5 months, Cholmley held out while Parliamentary guns battered the castle. The Great Tower collapsed under heavy fire, and in the end, Cholmley ran out of gunpowder and had to surrender. But that was not the end of the story. A force of 100 Parliamentary soldiers under a Colonel Boynton held the castle until 1648, but when Parliament failed to pay the troops Boynton changed sides and came out for the king. The whole bizarre episode ended in December 1648 when Boynton surrendered. Parliament, probably sick of any further mention of Scarborough Castle, wanted it slighted so it could not be garrisoned again. The townsfolk objected, and the castle was spared.

The castle served as a prison after the Civil War. One of the most famous people held here was George Fox, founder of Quakerism. A military barracks was erected after the Jacobite Rebellion of 1745 and the castle continued to be a military base until 1920 when it was taken into state care.

The garrison blocks were torn down, and the castle returned to its medieval appearance, under the care of English Heritage. 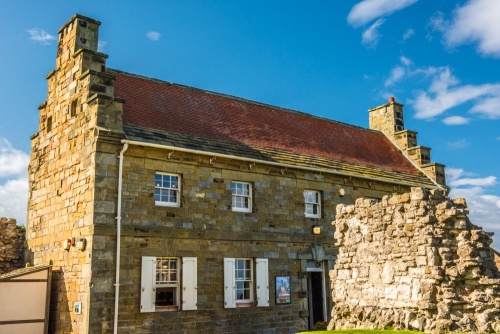 High sea cliffs defend the castle on 3 sides, while facing the town is a double ditch and barbican gatehouse. The most important building still standing within the walls is the Great Tower erected by Henry II. Only part of the tower still stands, due to the devastating Civil War bombardment, but what remains is impressive.

The tower stands 90 feet high with walls over 12 feet thick. You can see remains of the 14th-century bakehouse, kitchen, and brewhouse, and a 12th century well over 140 feet deep. A staircase leads down the cliffs to a battery built in 1643 to control access to the harbour below.

In the outer bailey is the 13th-century royal residence, now known as Mosdale Hall, and near the edge of the cliffs you can still see remains of the Roman signal station and a medieval chapel.

Remnants of the military importance of Scarborough after the Civil War can still be found; look for the Master Gunner's house, dating to the early 18th century.

There is no on site parking, and the closest place to park is in one of the is paid parking areas along Marine Drive. The castle is easily reachable on foot from Scarborough town centre, though it is a steep uphill walk. 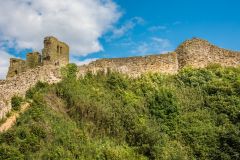 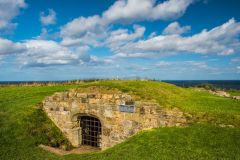 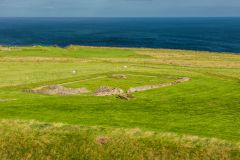 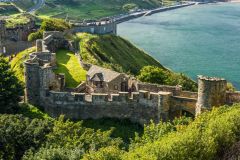 More self catering near Scarborough Castle >>