HERITAGE HIGHLIGHTS:   One of the great medieval royal palaces 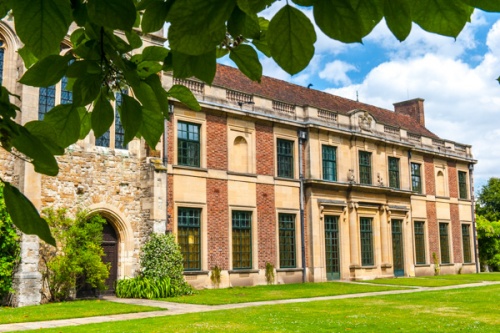 A combination Tudor palace and Art Deco mansion, Eltham Palace is unlike any other historic house in London. Henry VIII spent much of his childhood at Eltham, but in the 1930s the ruinous palace was rebuilt in sumptuous Art Deco style by the wealthy Courtauld family.

Eltham was first mentioned in William the Conqueror's Domesday Book of 1086. In the early medieval period, there was a moated manor here, set in a huge tract of parkland. In 1305 Anthony Bek, the powerful Bishop of Durham, gave Eltham to Edward, Prince of Wales (later to become Edward II).

Edward, in turn, presented it to his queen, Isabella. Over the next few centuries, successive royal owners transformed Eltham into a sumptuous royal palace, surrounded by a deer park stretching to over 1000 acres, where the royals rode and hunted. But they did more than just hunt; it seems that the gardens at Eltham were an important feature. Richard II added a walled garden where he and his queen could dine on warm summer days, and there were alleys protected by overhanging vines to create shaded walks. 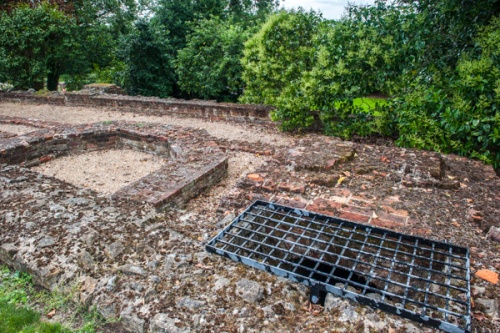 Foundations of the medieval palace

In the 1470s Edward IV extended the medieval buildings and added the large great hall, which is the most prominent historical survivor of the medieval palace. He also built the beautiful bridge across the moat that now provides the main visitor access to the Palace.

Henry VIII spent large parts of his childhood at Eltham and installed archery butts, a bowling green, and a pleasure garden outside the moat. He planted arbours surrounded by hedges, creating private nooks for secluded romantic meeting places. Eltham became the largest royal palace, able to host 800 members of the royal household and court. 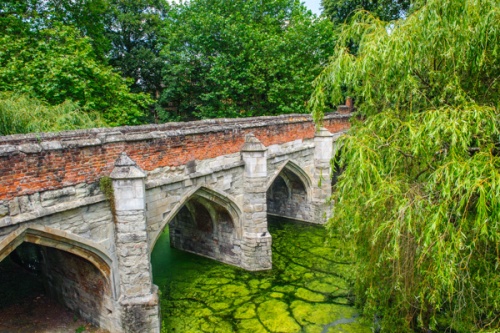 The 15th-century bridge across the moat

After Henry's death, the palace fell out of favour, as the royal family favoured other royal palaces like Greenwich. Eltham fell into decay, and the lead was stripped from the roofs of palace buildings.

Then in the mid-17th century, Sir John Shaw built a new residence in the park called Eltham Lodge, and the palace was rented out to tenants and used as a farm. The Palace became a romantic ruin, painted by artists such as JMW Turner.

The next big change came in the early 19th century when a villa was erected within the old moat, with a garden built inside the west and south moats. The medieval great hall was going to be torn down until a public campaign to rescue the building resulted in its restoration in 1828. Despite the restoration, the hall continued to be used as a barn, but the Palace was converted into a fashionable residence in the late 19th century. 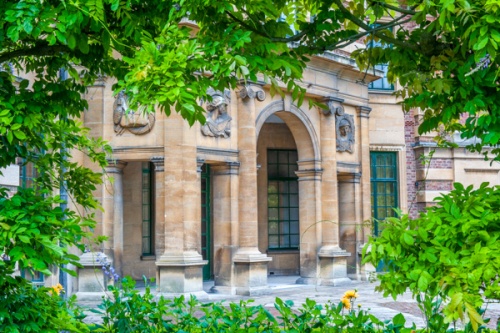 The last big change at Eltham came in the 1930s when Stephen and Virginia Courtauld leased the estate. The Courtauld's built an ornate residence next to the great hall, a superb and very expensive example of the then-fashionable Art Deco style. They also remodelled the gardens, adding a sunken rose garden, woodland garden, and rock garden. They raised orchids in new greenhouses and planted ornamental plantations with specimen trees.

The Courtaulds did not occupy their opulent house for long; they left in 1944 and the Palace was used by the Army until 1992. English Heritage took over after the Army left, and restored the house and 1930s gardens.

There are really two parts to Eltham; the 1930s house and the historic medieval great hall, which juts out at right angles to the main block of the house. You enter into the Art Deco hall, a stunning circular chamber. This leads to several large ground floor rooms including the dining room and lounge. Upstairs are the private cinema and family bedrooms, including Virginia Courtauld's gold-plated bathroom. 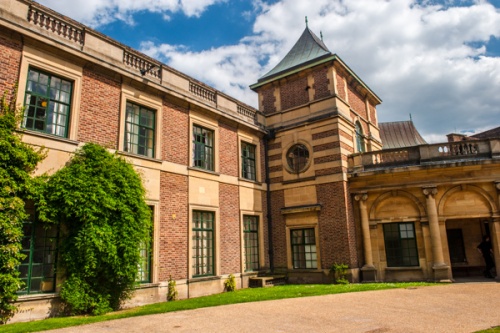 The Courtauld's had a passion for new and innovative ideas. For example, they had music piped into the dining room by a hidden system of speakers. One unexpected feature is the luxurious accommodation provided for the family's favourite pet; an African lemur. The lemur had its own quarters, with an access ladder.

Outside the house, you can see the foundation walls of medieval and Tudor buildings that made up part of the medieval royal palace. Steps descend to the west and south moat, now used as a garden area. The sunken rose garden is an absolute delight, with a view back to the medieval great hall. There is a garden terrace behind the hall, and you can descend again to moat level on the north and east side. 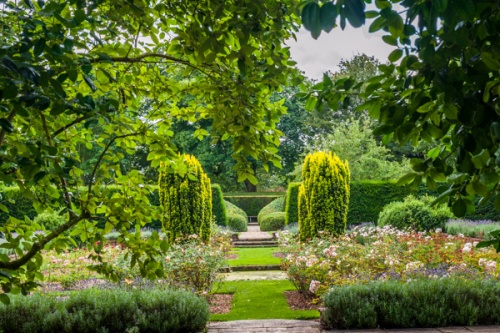 The sunken gardens in the former moat

We visited Eltham Palace on a lovely summer afternoon. To say that I was impressed is an understatement. The Art Deco house is simply stunning. It offers a glimpse into the world of the super-rich, leading society figures of the 1930s. And what a world it is! The Courtaulds spared no expense in creating an astonishingly ornate and exquisitely decorated residence, with magnificent wood panelling throughout, gilded decoration, and superb art and furniture.

The Great Hall was in the process of being restored when we visited, but we could peek into the hall from a gallery above one end, and see the amazing timber roof and heraldic symbols that decorate the interior. Outside, the gardens are a delight, a mix of formal and informal, and a superb example of 1930s style once again. The combination of medieval and relatively modern makes Eltham Palace an experience like no other.

Eltham is very well signposted from surrounding roads, with the parking area signed from Court Road. The nearest motorway junction is Jct. 3 on the M25, and from there simply follow the A20 straight to Eltham. There are convenient buses passing nearby, but no underground stations within easy reach. The nearest overground rail stations are Eltham and Mottingham, both about 1/2 mile from the Palace. 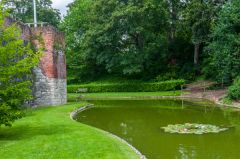 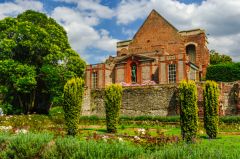 Note: You can get Free Entry to Eltham Palace with the London Pass

More self catering near Eltham Palace >>