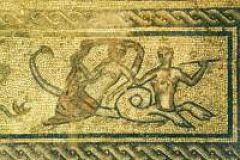 Back in July 2010, I wrote about a huge hoard of Roman coins found near Frome, Somerset. Metal detectorist David Crisp unearthed the largest single hoard of Roman coins ever discovered in Britain. Over 52,000 coins, dating from the 3rd century, were packed into a clay jar. While historians had a go at studying the coins, they were stored at the British Museum and were put on temporary display to the public. Now the permanent fate of the Frome Hoard has been determined.

The so-called Frome Hoard will be on display at the Museum of Somerset in Taunton. The museum, located at Taunton's historic castle, is currently closed for renovations but is due to open to the public later in 2011 following a £6.9 million rebuilding. Though this would seem on the surface to be an obvious place for the hoard to end up, its fate was far from clear.

The Museum of Somerset had to raise £320,250 in order to be awarded custody of the Roman find. To help in this fundraising effort the Museum of Somerset hosted a public event at the Bishop's Palace, in Wells. They were also aided by a grant of £294,000 from the National Heritage Memorial Fund. A further £100,000 was raised for preservation of the coins.

In England, when a find such as this is unearthed, there is a real possibility that if funds cannot be raised that the find will be sold at auction to the highest bidder. We should heave a huge sigh of relief then that the Frome Hoard will be preserved for the nation and available to view at the museum.

Mr Crisp has not done too badly out of the affair, either. Under terms of the Treasure Act, he will share the proceeds with the owner of the land where they were found.

Resources:
About the Frome Hoard
Museum of Somerset