A Hotel in Glasgow, Strathclyde 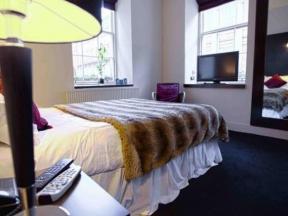 Rab Ha's is situated in the heart of Glasgow's Merchant City. You cannot get a more central location.

Rab Ha's consists of a delightful bar a downstairs function space and 4 Hotel rooms on the first floor. The new owners have been in charge since September 2017. It is a family run business and the Mullen Family have had connections with the establishment since running it in the early 90's (they have come full circle).

The food in Rab Ha's is fantastic - it has an international modern style with plenty of traditional Scottish dishes. Chef Alan Donochie has produced some delightful food to keep both locals and visitors satisfied to the max. Of course the service is attentive & friendly - (often cheeky) the answer to most things is 'yes' - most things.

This is a lovely wee place to visit and perfect for the city hopping traveller. If you want to experience Glasgow...Rab Ha's is for you. Named after a legendary 19th century Glasgow glutton Rab Ha's is a welcoming bar/eaterie with rooms on Hutcheson Street in Glasgow's Merchant city.

In the summer of 2017 new owners gave the much-loved City institution a thoughtful refurbishment. The very opposite of a bland chain Rab Ha's is an independent family-run business with oodles of character. Visitors can look forward to a cosy and friendly space with stripped stone walls an open fire and gorgeous wood panelling.

The continental breakfast is delicious - the cooked breakfast "Hearty". If breakfast isn't your thing, Rab Ha's boasts a great selection of Malt Whiskies and even the odd 'trendy' Scottish Gin. Hic!

Dining Facilities
A delicious Continental breakfast (by the fire!) is included in your booking however you can upgrade to a full cooked breakfast for ?7.50 per adult or ?5 per child per breakfast.

Get an Ordnance Survey map covering the Glasgow area.

The Georgian House Hotel
Bed and Breakfast (2.1 miles away)