HERITAGE HIGHLIGHTS:   Stroll the Lady's Walk, where Mary, Queen of Scots exercised when kept here as a prisoner 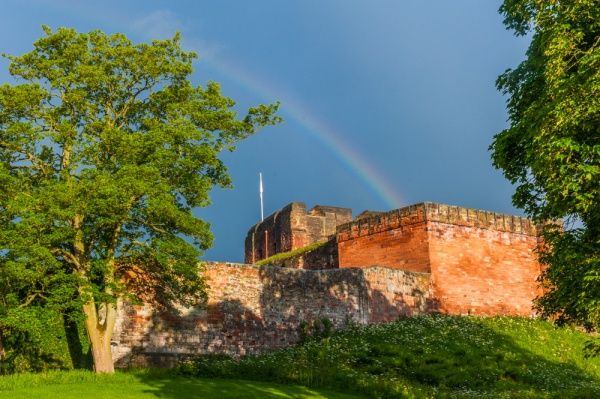 A rainbow over Carlisle Castle

In fact, since it was begun in 1092 the castle has faced more sieges than any other castle in Britain. From 1173 until 1461 the Scots besieged Carlisle town and castle at a total of 7 times.

It has also been occupied continuously since its foundation by William II, and from the 18th century until the 1960s it served as home to the Border Regiment, one of the oldest regiments of the British Army. 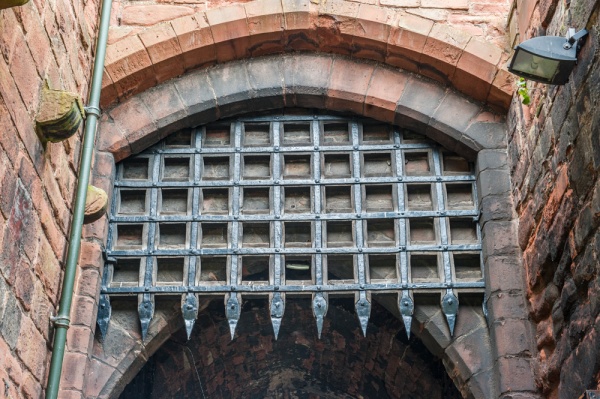 Though the castle we see today has its roots in the early medieval period, the history of Carlisle Castle goes back long before then. In AD 72 the Romans built a large fort defended by earthwork walls and a timber palisade. That fort acted as a staging post for Roman incursions into Scotland and later acted to support garrisons serving on Hadrian's Wall. By the mid-2nd century it was one of the largest and most important military forts in Roman Britain.

A settlement know as Luguvalium grew up around the fort, and this settlement was the basis for modern Carlisle. When the Romans departed Britain in the early 5th century Carlisle was a regional capital, the most important settlement in the kingdom of Rheged.

In 1092 William II built a timber fortress at Carlisle to control the tumultuous border region. William's timber castle was erected over a section of the old Roman fort and used a natural slope of the land as a defence to the north, and a deep ditch to provide protection to the south.

William's fortress was rebuilt in stone by Henry I in 1122. Over the next decade the city walls and castle keep were begun, though it seems they were incomplete by the time Henry died in 1133. After Henry's death, King David I of Scotland captured Carlisle. 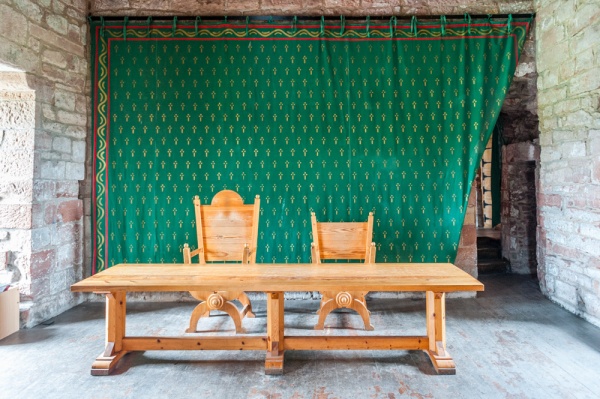 In 1296 Edward I made Carlisle Castle his base for his invasion of Scotland and transformed the inner ward in order to accommodate the royal court. In 1308, after Edward's death, a residential tower was erected. This tower was later used to house the castle's most famous prisoner, Mary, Queen of Scots.

In 1315 Robert Bruce attacked Carlisle, but was repulsed by a garrison led by Andrew Harclay. In 1322 Edward II made Harclay Earl of Carlisle, but in a quick about-face had the new Earl executed for treason the following year after Harclay negotiated a peace treaty with Bruce that recognised Scotland's independence from England.

The Scots were back in 1461, at the height of the Wars of the Roses, when they joined forces with the Lancastrians to oust the Yorkist castle garrison. The siege succeeded in part through heavy use of artillery, one of the first major British battles in which artillery played a leading part.

During the following centuries, the border region descended into turmoil as armed bands of reivers wreaked havoc on both sides of the border. In an attempt to combat the reivers the English border area was divided into three 'marches'.

The Western March was under the command of a Lord Warden based at Carlisle Castle. One of the Lord Wardens to serve at Carlisle was Richard, Duke of Gloucester, later Richard III. One of the most notorious reivers was William Armstrong of Kinmont, who was imprisoned in 1596. A band of his followers broke into the gaol and freed Armstrong. 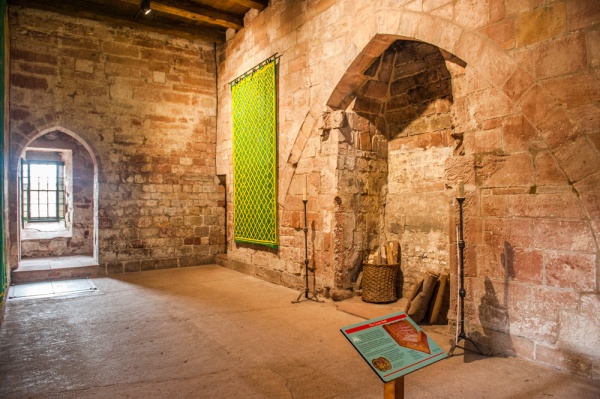 From 1538 Henry VIII ordered the defences of Carlisle strengthened. The castle was rebuilt by a military engineer from Moravia named Stephan von Haschenperg. One of von Haschenperg's innovations was the half-moon battery, and he also installed an artillery platform on the roof of the medieval keep.

Within the keep are cells used for holding prisoners. In one of these cells, visitors can see carvings etched in the stone by prisoners held by Richard, Duke of Gloucester when he was Lord Warden. The most famous prisoner to be confined at Carlisle Castle was Mary, Queen of Scots, who was held here after she abdicated the throne of Scotland in 1568.

Mary was held for several weeks in the Warden's Tower, later known as Queen Mary's Tower. Mary's confinement was hardly difficult; she had a small court of attendants, and keeping the court in food and wine cost the royal treasury 56 pounds per week, a very large sum at the time.

In 1642 the castle was garrisoned by Royalist supporters of Charles I. In 1644 a Scottish Presbyterian army under General Leslie army besieged the city, in an attempt to starve the garrisons and the citizens of Carlisle into submission. They were joined by an English army in 1645. The city faced starvation, and on 25 June 1645, they surrendered. 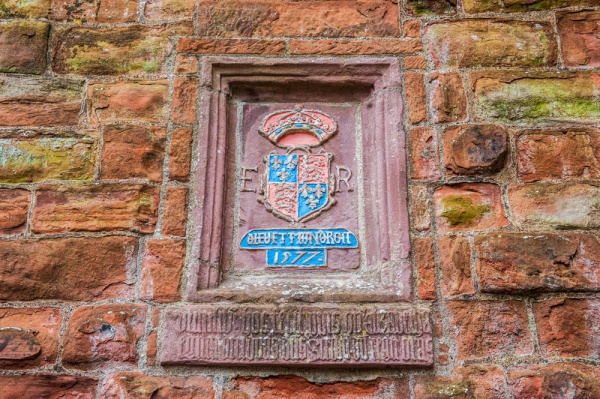 In 1745 Jacobite troops under Bonnie Prince Charlie captured the castle during his abortive attempt to invade England and seize the crown. The Jacobites could not keep up the momentum of their invasion and the castle quickly became a defensive bastion against the army of George II.

In the end, the Jacobites were forced to capitulate, and the castle became their prison. Thirty-one Jacobites were executed. The plight of the Scottish prisoners provides the background for the popular romantic ballad 'The Bonnie Banks o' Loch Lomond'.

The song tells the story of a condemned Jacobite in Carlisle Castle, facing execution. His beloved visits him in gaol, and he laments that 'I and my true love will never meet again'. The 'high road' in the song is the road taken by his love back to Scotland, while the 'low road' of execution will see him back in Scotland before her.

In the dungeon visitors can see the "licking stones" where the Jacobite prisoners were forced to lick the moisture off the dungeon walls to keep themselves alive, at least temporarily. The keep today houses a display on The '45 Rising and a model that shows the state of the city at that time. A small cell at the top of the keep is named after Sir Walter Scott's MacIvor, the hero of Waverley.

After the Jacobite rebellion the castle lapsed into decay. French prisoners of war were held here during the Napoleonic Wars, but the castle gradually became an army barracks more than a military fortress.

One of the new military buildings was a hospital, described by contemporaries as 'the worst army hospital' in Britain. The former hospital is now the Arnhem block. In the 20th century the outer ward became the headquarters of the Border Regiment while the inner ward housed a militia store and a magazine.

Within the castle is Cumbria's Museum of Military Life. The museum traces the history of Cumbria's own infantry regiment from its inception in 1702, with displays of uniforms, weapons, medals, and silver. Visitors can buy joint admission passes to both the museum and the castle.

Exploring Carlisle Castle is like following a timeline of English and Scottish history. So much has happened within these red sandstone walls. It is remarkable that the castle still stands, given all that it has been through over the past 900 years and more. 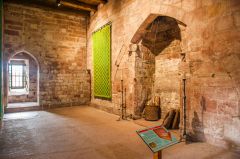 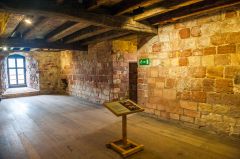 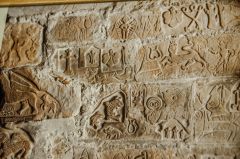 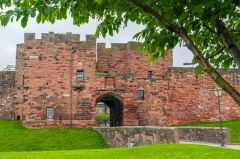 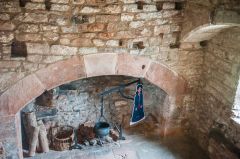 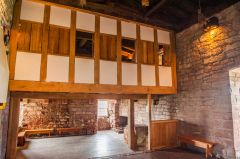 More self catering near Carlisle Castle