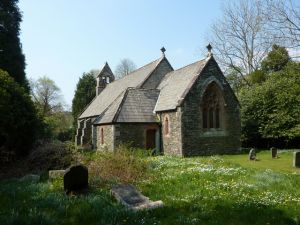 Blawith, St John's Church
There are two churches dedicated to St John's in the hamlet of Blawith. One is a 16th-century ruin that exists only as overgrown walls. We do not know precisely when it was built, but it is clearly marked on a map of the area dated 1577. By 1861 the old church had become so ruinous that a new church was built across the road.

The architect responsible for the new church was EG Pasley, who finished his work in 1863. The church is built of Whinstone quarried locally, beneath a slate roof. Most of the interior fittings and furnishings date to the late Victorian period. The style is very simple Gothic Revival, with some nice stained glass. There is a nave, south transept, chancel, and a west bell turret.

St John's became redundant in the 1990s and for many years it was cared for by the Churches Conservation Trust, who welcomed visitors to explore the historic building. Then in 2012, the Trust sold the church to a young local couple who wanted to restore the church and turn it into a family home.

The Trust made the decision to sell the building, which was not listed, in order to ensure that it was cared for and used. As a result, the building is no longer open to visitors, and you can only view the exterior.